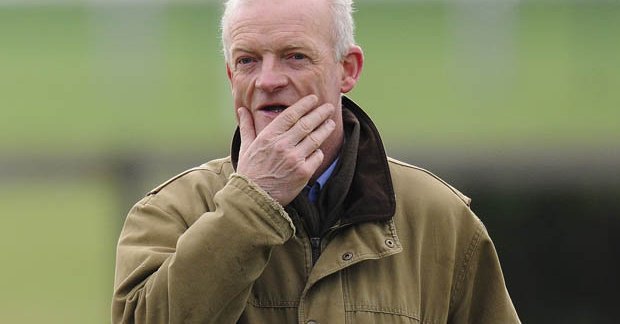 What’s this? A championship race without a Willie Mullins favourite. Someone get me to Specsavers, I’m not seeing straight.

But no, my eyes are bang on – we have a race that doesn’t revolve around Mr Mullins. What a treat.

If you’re on Twitter, you can also find us out and about on there! All things Cheltenham!

We’re on Twitter! If you’re also on board give us a follow! We’ll be tweeting live from Cheltenham! pic.twitter.com/w6yqrU2HEr

The World Hurdle is the showstopper on the Thursday on St Patrick’s Day: a race full of prestige that has crowned great champions such as Big Bucks’ and Ingils Drever. This year’s renewal lacks a superstar but this is by far a donkey derby event – there is quality throughout and we have a fascinating betting heat to delve into.

Looking back 12 months and the winner that day, Cole Harden (8/1), is back to defend his crown.

He’s been beaten in both of his starts this season but improvement is expected on a better surface.

That said, I’m not sure he’s been the same horse since that Festival win. He’s easy to swerve.

Thistlecrack has been the springer in this market this season.

He’s been a revelation for Colin Tizzard, who is having a sensational season with his big guns in his care.

Wins in the Long Distance Hurdle and Long Walk Hurdle have made bookmakers sit up and notice his potential – he is now as short as 9/4 for the big one. The form of his wins, especially last season when he ran Killutagh Vic very close at Punchestown after winning at Aintree, certainly stack up.

However, I’m all about the price and there’s no chance of me taking 9/4 about a horse who has yet to show he thrives at the Cheltenham Festival. Course form is backbone of all my punting philosophies at the Festival.

You would have got a huge price on Paul Nicholls running Saphir Du Rheu (12/1), Pitt Zig (33/1) and Silviniaco Conti (33/1) in the World Hurdle. All three were near the top of Nicholls’ tree in terms of the chase division at the start of the campaign, especially Saphir Du Rheu.

He was trading at single figure prices for the Gold Cup in October such was his lofty rating but after a lacklustre campaign he’s been switched back hurdling and goes for a race he finished second in last season. He merits respect, but my money is going elsewhere.

Having backed Bobs Worth at 33/1 earlier this season, I’m now also going to add another Cheltenham specialist to my portfolio.

At Fishers Cross can be backed at 33/1 and he brings plenty of pros to the table.

For starters, his Cheltenham record is solid. Three wins from six starts, including winning the Albert Bartlett Novice Hurdle in 2013, and he’s never finished out of the first four in a Prestbury Park race.

Rebecca Curtis’ charge has had his problems but is very gutsy and has shown he relishes the hullabaloo of Festival day.

Admittedly, his return from a lengthy layoff in Ireland behind Alpha Des Obeaux (9/1) was nothing more than satisfactory but I’ll be stunned if doesn’t come on hugely for that run.

Alpha Des Obeaux certainly enters calculations on that form but that fall he took at Aintree is stuck in my mind – I’ve got a feeling when the pressure increases, his jumping may cost him his chance.

In a race where there are more imponderables than fact, the been there done it profile of At Fishers Cross is worth risking at a big price with each way stakes.