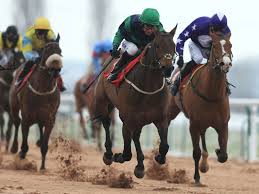 Lewis Jones is spending a day down at the beach today as he heads to Southwell for some Fibresand action. There, he finds a horse close to his heart, who he calls “the Frankel of the Fibresand”………….

The money making machine himself, Dubai Hills, returns to the Fibresand today and there is no reason to oppose him in the Ladbrokes Handicap at 3:50.

Dubai Hills, who makes his debut for the David O’Meara yard today, one which does brilliantly in improving horses further, is unbeaten in seven races over six furlongs on the Fibresand and it wouldn’t be wrong to call him perhaps one of the best horses ever to have raced on this surface at Southwell.

He’s what Phil Taylor is to darts and what Tiger Woods was to golf: a champion and one who has made a lot of people a lot of money over the years. In my eyes, he’s the Frankel of the Fibresand. He may not be as flashy as Henry Cecil’s legend but he has the attributes required to win races on this type of surface. He possesses great tactical early speed to make sure he gets a perfect pitch, travels like a stag and gallops through the deep ground stronger than any other horse currently in training.

This will be his toughest test to date as he looks to defy a career high mark of 99 but such is his ability to plug through adversity, we’re more than happy to side with him at 6/4 although the race is a hot one.

He renews rivalry with Frontier Fighter today, who he beat by a neck last time out but is better off the weights with that rival due to the fact that Frontier Fighter has won twice on the surface since that meeting.

That runner is also trained by O’Meara and you would think he would have a good idea of which horse was working better at home, so the market will be a big pointer. Dubai Hills has been all the rage whilst Frontier Fighter has been weak. I think that says a lot for the way the race is expected to go.

Dubai Hills’ biggest danger probably will come from the outsider Dr Red Eye, who is 3lbs lower than his previous winning mark and Southwell and relishes the surface. Not as much as the selection though, who will take all the beating. Four point win stakes.