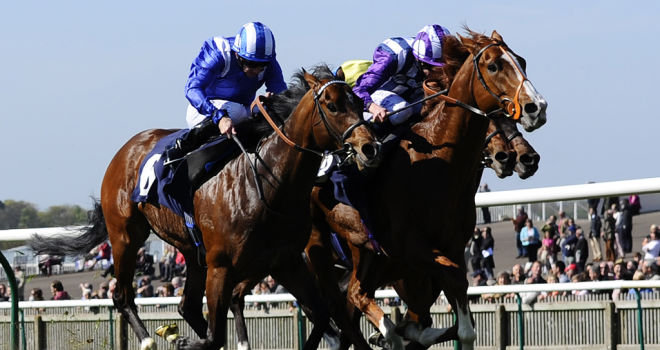 Most of the country’s high-profile trainers have sent horses to Sandown for tonight’s meeting, and although on first viewing, the standard of races looks low, there’s bound to be some nice types lurking in their somewhere.

Sir Michael Stoute, Richard Fahey and John Gosden don’t send horses to Sandown unless confident of seeing some ability no matter what their current rating is.

But, it’s the Richard Hannon yard that may just strike hot this evening as we like the chances of Azmaam in the British Stallion Studs EBF Maiden Stakes.

The Hannons, as always, have a very strong influx of two-year-olds this season and the selection is thought of quite highly by the team at home despite not winning on his debut Newmarket.

He was backed into favouritism that day but couldn’t quite find a way past the strong front running performance of Diaz, who looks a nice sort for the Johnston stable.

He’s a 260,000gns brother to the Group 2 winner Alhebayeb and a half-brother to five winners including the Listed winner Humidor.

He was well backed, giving the impression the yard have high hopes for him and he didn´t have a lot of room coming to the last 2f, but picked up well after being switched out wide and managed to grab second near the line.

He should go one better and that day could be today although he will have to show improvement to see off Darshini from the Sir Michael Stoute yard, who has Ryan Moore in the saddle. My only gripe with the Stoute runner is that the stable don’t usually completely rev up their two year olds at this stage of the season and he is to be swerved on those grounds despite being prominent in the market.

Get on the Hannon runner with a two point win stake.

Eagle Top showed huge improvement to win the King Edward VII Stakes at Royal Ascot with jockey William Buick having to take a pull in the final two furlongs such was the ease at which the horse was travelling. He’ll take on the likes of Taghrooda, Telescope and Magician in what is shaping up to be a superb renewal.