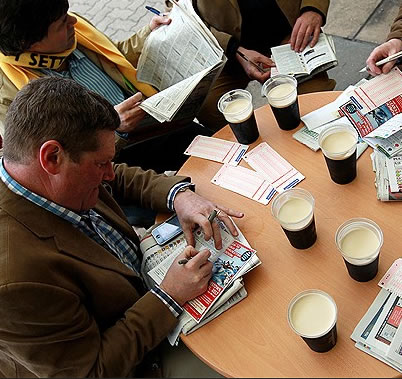 The new tipping column started with a bang on Monday with Laidback Romeo delivering the goods at a juicy 7/2.

That puts Lewis +5pts to the good and he returns today with a big priced fancy at Salisbury….

There’s some tasty racing at Salisbury and Carlisle today, which has triggered my punting instinct.

I’ll be officially tipping up just one horse today but there are a couple of runners worth noting – onto those in a mo, first up, the day’s best bet.

ZUGZWANG may not be as attractively handicapped as some of his rivals in the MOLSON CORRS HANDICAP (Salisbury 4:55) but he has been grossly underrated by the markets at 20/1.

I was significantly impressed with his performance when winning a handicap at Bath three starts back.

He travelled through the race like a good horse and put the contest to bed under hands and heels riding that day.

His handicap mark suffered as a consequence but that didn’t him running another fine race next time out at Newmarket, where he really knuckled down to finish a very close second behind Amood.

He isn’t the most straightforward horse as he has a tendency to hang right under pressure but the make-up and right-handed nature of Salisbury’s track may negate those problems that were seen at Epsom on his last start.

Although the form book says he was beaten seven lengths on Oaks Day, he ran with much more vigour than the result suggests, travelling like a stag at the head of affairs before looking very ill at ease on the track when asked to go and win the race at the two furlong pole.

Granted, this is a very competitive handicap with a potential Group horse heading the betting in the form of the lightly raced Lightning Spear.

He looked decent when winning at Lingfield last time out in a race that is working out well and wasn’t run to suit. But at 6/4 he is far too short and opens the race up in the each-way market. The selection should run better than the odds suggest.

Although I’m not officially tipping it up, Touchline should prove pretty hard to beat at Carlisle in the BRITISH STALLION STUDS EBF ETERNAL STAKES (Carlisle 4:10) at 3/1.

Michael Bell’s string are in fine fettle at present at this horse run a blinder in the Sandringham Handicap last week at Royal Ascot to finish third behind Osalia and Always Smile.

That form looks one to keep very much on the right side of and it wouldn’t surprise me to see Touchline progress into a very decent Group performer over seven furlongs as time ticks on.

A form line I’m also interested in is the Laidback Romeo line from his effort at Goodwood, where he finished behind Resonant.

Only one horse got close to chasing home the winner that day and that was Darshini from the Sir Michael Stoute yard.

Again, not an official tip, but certainly one to keep an eye on at 11/4.