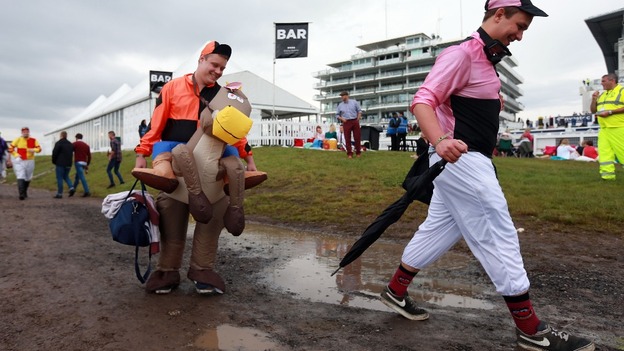 Lewis Jones has found it hard to get excited about today’s “summer” flat racing as a deluge of rain and non-runners has made the cards a bit of a punting minefield. He has however found one bet that is worth following. Small stakes advised though…

Yes, it is August, don’t let the weather fool you. The end of this summer’s flat season looks set to be a bit of a washout judging by the forecasts for the next week or so. Tuesday’s rain has left the racing cards decimated with 38 non-runners already announced by 11.20am.

Epsom is the worst hit, with 19 non-runners out because of the ground.

The Surrey course had 30mm of rain on Monday, which turned the going heavy, and despite that improving to soft, heavy in places over a third of the 50 declared runners have been pulled out.

Make sure you’re careful with your punting today, with the ground ever changing by the minute, anything is possible.

Epsom is the location of my only punt today in a race that has been torn apart by non-runners. This has only enhanced the claims of Huntsmans Close in the John Akehurst Handicap but his price has taken a huge hit and he is now no bigger than 3/1 after being a 6/1 shot this morning. That is still a price to get involved with though as he has plenty going for him and his by far the most likely winner.

Roger Charlton’s gelding was a bit of an eye catcher behind Swiss Cross at the track a couple of starts ago. He finished third but was never in a position to strike in a slowly run race and his effort has to be marked up in that regard.

He took another step forward last time out when finishing sixth at Goodwood in a decent race for this kind of grade. Once again, his effort was better than his finishing position suggests as he found plenty of trouble in running and would have troubled the first three with a clearer run.

The rain that has fallen today has only further enhanced his chances and he has a high draw which looks a good angle to exploit when the turf gets soggy in Surrey. With the in-form George Baker booked, the selection should go very close. Get on his chances with a one point win stake at 3/1.