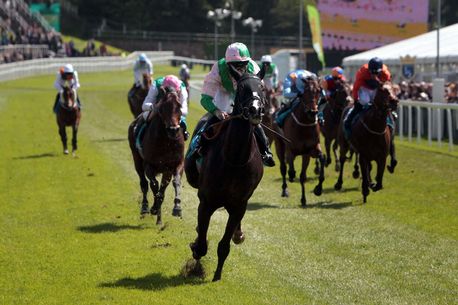 There are fewer more exciting days in the racing calendar than the opening day at Glorious Goodwood. Lewis Jones is in fine fettle and has sent over his thoughts for the day…

Richard Hannon and Richard Hughes are a team that punters follow religiously at Goodwood but they may be out of luck today in the Bet365 Lennox Stakes.

Favourite Toormore hasn’t really moved forward this season and he can be taken on at the head of the market.

The one we’ll be backing with each-way stakes in this nine-runner race is 25/1 shot Here Comes When, who is hugely overpriced on bits and pieces of his form.

This isn’t a strong Group Three and Andrew Balding’s classy customer showed his true worth at Chester earlier this season when he bolted up.

Things haven’t gone to plan since, being beaten at Haydock and in the Hunt Cup, but back on a track which should suit, he’s more likely to go close.

The form of Andrew Balding’s stable, who are without a victory in the last two weeks, is a bit of a worry but a couple of his string have been running better in the last few days.

Any rain would help immensely, and we’re getting on with two point each way stakes at 25/1.

One horse for odds-on punters to steam into is the very exciting Beacon for the Richard Hannon team. He goes in the Bet365 Molecombe Stakes at 2:30 and it will be a huge surprise if he’s turned over by this moderate bunch.

We landed a bit of a touch when following Beacon to victory at Sandown last time out and the ease at which he put his rivals to the sword at Esher makes him of strong interest stepped up in class for this five furlong contest.

Hannon’s sprinter looked an exciting prospect when winning with plenty in hand at Salisbury despite plenty of things going wrong during the race.

He then moved forward considerably on that performance when slamming a classy field that including plenty of leading form from Royal Ascot.

The Highclear-owned speedball was in a different league that day, travelling powerfully under Richard Hughes before staying on all the way to the line.

One of the rivals he has to see off is the talented but frustrating Mukmal, who was on our horses to follow list after winning from an horrendous draw at Chester.

However, since then, Mark Johnston’s charge has refused to settle in races at Ascot and behind Beacon at Sandown. He looks the main danger if jockey Paul Hanagan can work his magic to rein in Mukmal’s enthusiasm for racing.

But Beacon is the one they all have to best and those with a passion for backing shorties should fill their boots with this one, although we won’t be officially recommending him as a wager.