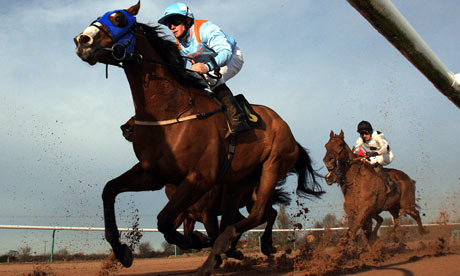 Another day, another winner for Lewis Jones as he kept the profit of this column ticking over by advising Dutiful Son at Kempton at 10/11 (went off at 1/2). If you had followed Lewis since Cheltenham using his points to profit system, you would be sitting pretty with a profit of £37.13 from just £1 point stakes. He’s betting at his favourite track today. Bookies beware…..

The Best Odds At bookmakers.co.uk Median Auction Maiden Stakes is an intriguing betting heat and is where my focus lies today at Southwell. It’s a race where eight runners are declared and there is each-way value to had with bulky stakes despite the very low grade action on show.

All the money this morning has been for the Alan McCabe newcomer Red Primo, who has been backed in from 8/1 into 11/8 favourite, but with an unproven makeup he’s best swerved at short prices.

With the each-way terms looking very favourable in our favour, it seems rude not to have an each way tickle on Ishisoba at 33/1 for the powerful Ron Harris yard.

This filly is a much better animal on the Fibresand than the Polytrack and course form is so crucial when betting here, it’s almost pays to completely ignore previous runs away from this unique Fibresand surface.

She has run three stinkers of late at Kempton, hence why the markets don’t rate her chances here, but go back to earlier in the season and you find three very respectable runs at Southwell, where she finished 3-2-2 and finished beaten less by four lengths on all occasions.

If she’s in that mood, she’s a player here, no doubt, and the 33/1 quotes for a horse of this capability in a rank race is well playing with each-way stakes, especially with only eight running.

What makes her especially appealing at the prices, is the way she races. She is a perfect horse to back around Southwell’s six furlongs. In all her races here Harris’ charge has broke very snappily, travelled well into the race and showed a decent attitude off the bridle.

If she recreates that style today, then she should be in the mix while others will be struggling to go the gallop. That should hopefully be enough to get her in the first three, and maybe win? You never know.