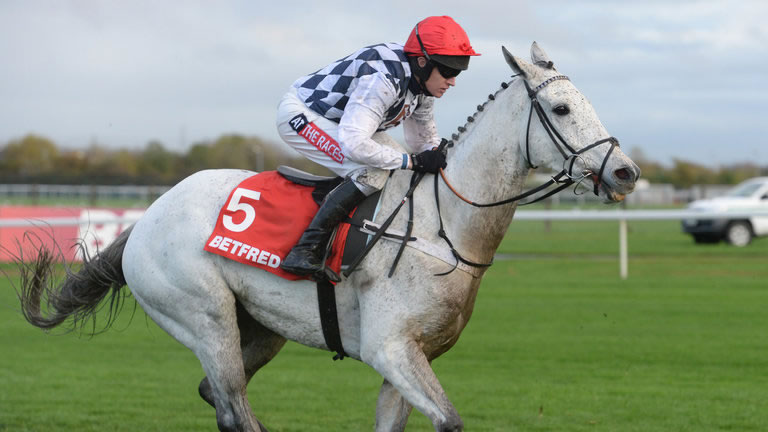 There’s a juicy looking card at both Sandown and Aintree this weekend and we aiming for some big returns.

We have a plan in place to accomplish that goal on Saturday, by backing SIMONSIG to win the Tingle Creek Chase at Sandown (3:00) and DON POLI to land a valuable staying chase at Aintree (2:15).

At current prices, the double pays 10/1 and I’ll be shocked if we don’t get a very good run for our money. Both horses have outstanding claims and can only further enhance their Cheltenham Festival pedigree by winning their respective outings this week.

Paddies have been in touch to tell us they’re going 9/1 on Don Poli to win the feature 2.15 at Aintree Saturday, which is a price boosted from 7/4.

For those that perhaps don’t have the minerals to follow both in the double, singles are advised too, especially on the chances of Simonsig, who for some reason has been priced up as the second favourite at 3/1. He’s a 7/4 poke in my view for this Sandown spectacular.

Who is Lewis backing? – He’s picked out a 10/1 shot for Saturday, includes the Tingle Creek!

Personally, I’m already sitting in a very pretty situation as I managed to gobble up some of the 8/1 on offer each way earlier in the week before the withdrawal of favourite Un De Sceaux. It’s a big shame the Champion Chase isn’t running.

He made the market, hence the silly big price on offer for Simonsig, and it would have been immensely interesting to see how he fared over Sandown’s fences. He was an obvious danger to Simonsig and the fact he’s out of the way only enhances our boy’s chances although his price has taken a bit of a whack.

Nicky Henderson’s chaser is a fascinating horse as he won a two-time Cheltenham Festival winner, who had been tipped to dominate the chasing scenes but injures put him off the track for two years. He made his much anticipated comeback over hurdles at Aintree last month.

It’s fair to say it was a strange one. Bobs Worth got the better of him that day but Simonsig travelled all over the winner but blew up in the final 200 yards and didn’t have the durability to defeat Bobs Worth.

Many were downbeat about the performance, but it showed me enough spark to suggest that when put back over a fence Simonsig has the credentials to win races in what is a poor division over two miles, starting this weekend, where the Tingle Creek has cut up significantly enough to make him the most likely winner as long as his jumping holds up.

Meanwhile, Don Poli should also take a fair amount of beating at Aintree on his reappearance.

This chap has been severely underestimated by the markets for the Gold Cup. Although we’re in a vintage year this horse has every box ticked for a top-class staying chaser.

His win in the RSA Chase last year was full of grit and relentless jumping. Aintree is perhaps a strange track for his first run of the season but Willie Mullins is a master at spotting winnable opportunities for his horses, so I’m willing to trust his decision. This three-mile plus trip should suit his style.

We have to take his fitness on trust but it’s not the strongest renewal and if he’s a Gold Cup contender – which I’m very positive he is – then he should be picking up and carrying most of his rivals on Saturday. Grand National winner Many Clouds is the danger on figures but we may have seen the best of the horse after last year’s heroics.