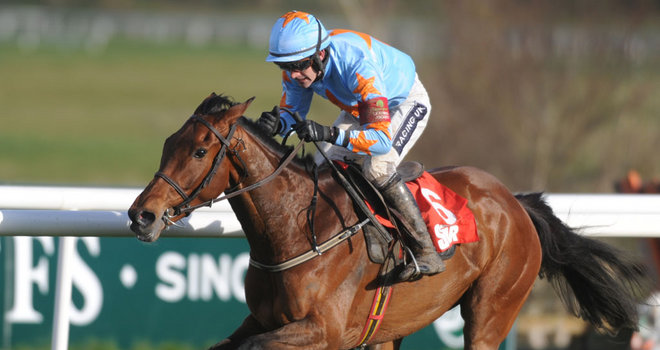 Lewis takes a look at The Arkle on the opening day at the Festival – Does Willie Mullins have this one wrapped up?

This French import has been left at home for the past two Cheltenham Festivals owing to reasons that probably revolve around him actually being a live threat to some of Mullins’ hot-pots in the past. Rarely does Mullins throw two top horses into the same race.

There has been a cloud over this fella about how good he really is after winning all seven of his starts over hurdles in pretty modest company but there little doubts about his ability now.

He was simply breath-taking on his third start over fences, beating Clarcam and Gilgamboa by 15 lengths in a supremely exciting front running display of jumping at speed, which rocketed him to the top of the Arkle market.

His tactics are simple and much like Sprinter Sacre, who won this race in 2012, as he likes to blaze a trail but can sustain it over two miles right until the line.

Un De Sceaux does have a F next to his name though after buckling on landing on his chase debut, so there is a slight chink in his armour and only one of the last 17 winners of the Arkle had fallen over fences.

Vibrato Valtat (Odds 5/1): Paul Nicholls is a genius. How he has improved this horse is a testament to his ability. Rated just 140 over hurdles, the horse is now a top-class chaser rated 160 after three Graded wins at Sandown, Kempton and Warwick.

Far from straightforward, Vibrato Valtat needs to be produced late in his races as he doesn’t do much in front, but it’s hard to knock his achievements over fences thus far. His latest win was probably his most impressive, easing past Top Gamble over the last in the Kingmaker Novices Chase to win by four lengths.

Josses Hill (Odds 12/1): Second behind Vautour in the Supreme Novices Hurdle last season, Josses Hill has surprisingly struggled to transform that form to fences. Being beaten by JLT Novices fancy Pitt Zig on his debut was no disgrace but he’s failed to improve from that, scrambling home in a poor race at Doncaster when he jumping was abysmal before being beaten by the well exposed First Intention at Sandown last time out. Improvement needed.

It’s a simple case of if he jumps round, he wins. Un De Sceaux is one to look forward to but whether he’s a punting option at 1/2 is ultimately depending whether you have the balls to play those odds.

The price is right.

The place market or on the day “Without Un De Sceaux” market is the one to play here as Vibrato Valtat and Josses Hill are too short in the betting. The Nicholls runner doesn’t strike me as a lover of Cheltenham and may weaken up the hill while Josses Hill flatters to deceive with his jumping.

This opens the door for a punt on THREE KINGDOMS, who was only beaten half a length by Vibrato Valtat at Kempton earlier this season and is gutsy performer that will keep galloping.

Tip: Three Kingdoms in the without Un De Sceaux market (odds TBC – around 6/1)