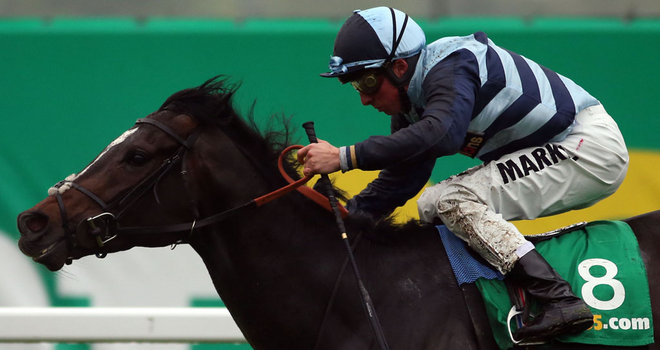 Lewis Jones was left bamboozled by Al Kazeem’s performance at Newbury yesterday, where he was beat despite going off a well backed 11/10 shot. It must be now doubtful that he´ll ever again match his peak form from last year, but his connections were thrilled with this run, and the Juddmonte International wasn´t ruled out. Lewis is back on the horse though today and has one selection to ponder…

Despite finishing a well beaten sixth in the Epsom Derby, there is many reasons to follow the chances of Western Hymn going forward this season, starting today in the Prix Eugene Adam (Grand Prix de Maisons-Laffitte) at 2:40.

He failed to handle Epsom when finding plenty of troubling in-running but still ran with great ability to get as close as he did to Australia and Kingston Hill, who have shown the form to be very strong since.

Today’s contest looks very winnable from Western’s Hymn point of view as he’s already dished out a beating to the second favourite Master Carpenter at Sandown. Get on his chances with a three point win stake.

Meanwhile, yesterday there was Group One action the Curragh with the Aidan O’Brien-trained Bracelet racking up a second major win of her career following on from her Royal Ascot success three weeks ago.

It was a second Irish Classic for jockey Colm O’Donoghue and a fourth for O’Brien, who had thrown five darts at the board for this year’s renewal with Bracelet only chalked up as third favourite behind stablemates Marvellous and Tapestry.

O’Donoghue had the 10-1 shot in a lovely position just off the leaders and the Ribblesdale Stakes winner picked up well in the straight to deny 13-2 chance Tapestry – ridden by O’Brien’s son Joseph – by a neck. The Oaks form from Epsom was on show and it was upheld to a certain extent by the third Volume, who put in a game front running performance to finish third once again. However, the well-backed favourite and Oaks second from Epsom, Tarfasha, travelled like the best horse but flattered to deceive when off the bridle and finished disappointingly down the field.

The slight knocking of that Oaks form certainly hasn’t put punters off piling into Taghroodha in the King George at Ascot next weekend. She is now vying for favouritism with Telescope around the 11/4 mark after being available to back at a massive 8/1 earlier this week.