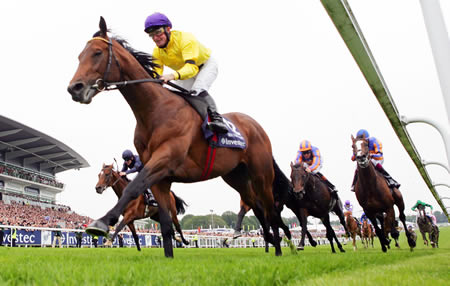 Lewis Jones has his eyes firmly fixed on an exciting filly in Ireland today who he is backing with big stakes at 100/30…..

Aidan O’Brien’s three-year-old fillies this season have already shown on multiple occasions that they aren’t the most talented bunch ever to have popped up at Coolmore and I’m well against Palace in the Derrinstown Stud 1,000 Guineas Trial.

O’Brien has seen his three-year-old females beaten heavily in the English 1,000 Guineas and the Chester Oaks and Stars So Bright can account for another one today at Leopardstown.

The daughter of Sea The Stars, who has begun his breeding career with a bang, runs in the same colours as his father and landed her maiden in the style of a very classy customer at Dundalk.

She’s far from the imposing figure that Sea The Stars was on a racecourse but she seems to possess the same turn of foot, which makes her a big danger to the O’Brien filly today at 100/30 with Coral on ground that should suit.

Get on John Oxx’s filly with four point win stakes.

Meanwhile, the Derby picture was given a bit of a shake up yesterday at Lingfield with Snow Sky easing to victory in the Derby Trial. Sir Michael Stoute’s colt was put in his place behind subsequent winner Western Hymn at Newbury the time before but looked a very classy operator yesterday, although the form of the race makes it hard to fancy his chances at ante post odds of 25/1.

Western Hymn was a big mover as Snow Sky franked his form considerably and he is now as short as 8/1 in places but Ladbrokes, who are notoriously quite stingy with their prices, have him at a juicy looking 16/1. That could well be a bet to consider with the Derby now less than one month away.

Speaking of the Derby, the Derrinstown Stud Derby Trial Stakes – Ireland’s key trial for the Epsom showpiece – is run today with a great dual between Aidan O’Brien’s Geoffrey Chaucer and Fascinating Rock, who is 2-2 this season and has been mightily impressive on the eye.

Both can be backed at this stage at 16/1 but a dominating performance from either would probably see their price collapse in half. If you fancy either of their chances for Epsom, get on now.

My ante-post pick Bunker has been declared for the Dante Stakes at York on Thursday, where he takes on True Story, who is as short as 6/1 for Epsom. Looking forward to that one.