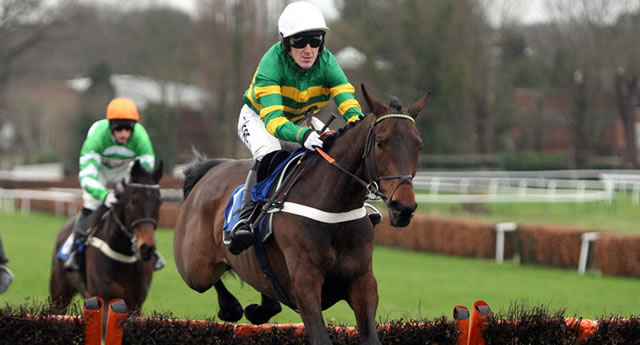 Lewis Jones has decided that today’s action from Plumpton and Musselburgh is not worth the time or effort looking into, therefore he’s looking further afield. Cheltenham is just over two weeks away now and he’s adding another horse to his ante-post portfolio…

Another frustrating day yesterday. Our thinking to swerve Saphir Du Rheh was spot on but our selection Meister Eckhart was done in a photo finish, denying us a bulky 4/1 winner.

We’ve changed our tactic for today and in the wake of the news that Sprinter Sacre will miss Cheltenham, it feels a perfect time to take a look at the ante post market for the Champion Chase.

Now the ante post favourite has been scratched it opens the race up, especially in the each way market and that is where out focus lies.

Sire De Grugy now leads the market and his progress this season under the shrewd eye of Gary Moore had been one of the success stories of the season.

By winning the Tingle Creek and Clarence House, he’s established himself as the top two miler in Sprinter Sacre’s absence.

On form, he’s the obvious standout but two defeats at Cheltenham is hardly ideal for a short price favourite for a championship race at the festival.

There’s only one horse in the line-up that has beaten Sire De Grugy this season and he’s our selection. Kid Cassidy looks a decent each way call at 8/1.

Despite being 10lbs better off at the weights for that win, Henderson’s quirky sort was well on top at the line and won going away.

His next showing in Ireland was poor but the race didn’t pan out in his favour that day and he’s always been inconsistent away from Cheltenham.

He is the kind of horse that in a weak renewal could come late under AP McCoy through beaten horses and cause a bit of a shock.

With Sprinter Sacre out of the picture, this is a race anyone can win.

But at the prices, Kid Cassidy has to be backed. Get on with a 1pt each way stake.