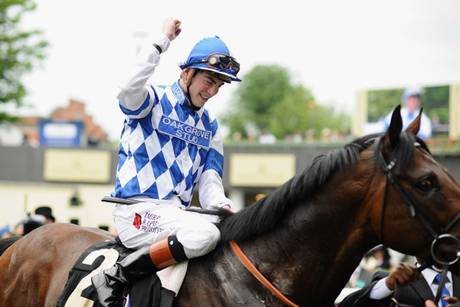 Lewis Jones, in search for a confidence boosting winner, has put his faith in an old friend who returns at Newbury today. In Lewis’ words, you can get 9/4 on a horse that perhaps should be odds-on. Read on and you’ll be tempted by his words….

As Saturday’s go, today is a rather low key day of action with only the Irish Oaks from the Curragh offering up some proper top quality action.

The late withdrawal of Epsom winner Taghroodha, who now will go to the King George at Ascot next weekend, has further degraded the contest that looks ripe for her stablemate Tarfasha to win with ease. She isn’t where our money is going today though as she looked fairly priced up around the 7/4 mark.

In fairness, we may be doing the Doom Bar Stakes at Newbury a disservice as it’s pulled together an intriguing bunch of horses, including the returning Al Kazeem, who landed us a far few gambles in the past before being retired for a life at stud.

Things haven’t gone entirely to plan for Roger Charlton’s beast as he was found to be infertile at stud and he will return to the racecourse at Newbury with his pride a tad bruised but well prepared to impart a bruising or two on his rivals along Newbury’s long winding straight.

Charlton has this to say on how his former start pupil has done since his return to training: “His attitude is good, he never looks at a filly, he’s completely concentrated on what he’s doing. He’s always been a noble and good-tempered horse.

“So I don’t think he’ll come in here, standing on his hind legs, shouting and sweating and screaming, you know, looking an arse. I expect him to behave like he’s always behaved and I think people will say he looks very well.”

In my mind, Al Kazeem, available to back at 9-4, should be an odds-on shot for this race at Listed level, which represents a major step down in class for an animal that won the Eclipse and the Prince of Wales last season with his talented jockey James Doyle in the saddle.

Al Kazeem may not have to be fully wound up to win this contest with some unproven horses standing in his way. Charlton’s words have filled me with great faith and I’m willing to lump on Al Kazeem with maximum stakes. Five point win.