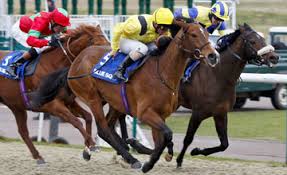 Winner, winner, chicken dinner. That’s what Lewis Jones was shouting yesterday after Volnay De Thaix romped clear under Barry Geraghty at Newbury. The in-form tipster will look to continue the winning run today as he takes a peek at the Winter Derby card at Lingfield…

When in search for a confidence boosting winner, stripping all tactics back to basics is sometimes the best form of attack.

That theory yielded maximum results yesterday as following a progressive and well handicapped youngster, trained by the master that is Nicky Henderson, brought about a tasty 7/4 winner. Let’s hope the winning momentum keeps on rolling today at Lingfield, where the Group Three Winter Derby plays the feature role on one of the highlights of the all-weather season.

Grandeur comes into the race at 3:50 the hot favourite having won the key trial for this event and being well clear on official ratings. If this race was run in a straight line with no effect from the draw then taking the 6/4 on offer would be a shrewd play but considering the draw Jeremey Noseda’s horse has got – 14 of 14 – he has to the taken on, despite his clear ability at this level.

So, who’s got the toe to beat him around Lingfield’s undulating and very speedy track? Premio Loco is a grand old servant but isn’t the force that saw him win this in 2012 while Godolphin’s charge Windhoek has always been overrated in my eyes and will once again find one or two too good.

The selection simply has to be Farraaj, who is trained by the very capable Roger Varian and has the tactically brilliant Andrea Atzeni on board.

The five-year-old, who justified favouritism in this race last season, has been a horse riddled with problems but Varian isn’t one to run for the sake of it, so you can guarantee that he’d be back to somewhere near his best today. That should be enough to see of the favourite.

Having only had 10 starts, there’s reason to believe that there are better things to come from this son of Dubai Destination and he has conditions to suit for this Group Three. Varian’s charge is 2-2 over course and distance and possesses the perfect mix of high cruising speed and a change of gear that makes him a Lingfield 10-furlong specialist.