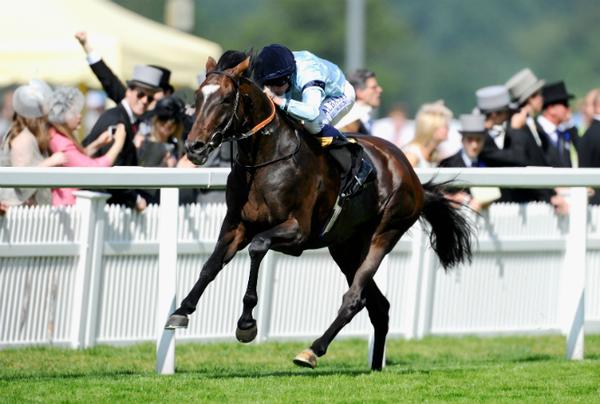 Its been a cracking week with plenty of winners at Ascot, lets round it off with a successful Saturday!

Mark Johnston’s two-year-olds have been flying this week and the selection ran in a very hot race at Newbury, finishing fourth.

He rates as the value call against Ballydoyle, who despite getting tonked on her racecourse debut is somehow 6/4 for this race.

She is apparently a beast but anyone backing her at short prices need their heads looking at.

If the rain gets into the ground to take the firm out than COLLABARATION has to be backed against short-priced favourite Mahsoob in the Wolferton Handicap (3:05).

Andrew Balding’s charge is on the search for a four-timer after winning at Windsor, Chester and Epsom but there still may be a little juice in his handicap mark such was the ease at which he powered clear at Chester. Rain is crucial though.
The Hardwicke Stakes (3:40) looks an intriguing contest with the best of the 1m4f crop of British based horses lining up.

Telescope absolutely dotted up in this race last year but isn’t a horse that consistently brings that form to the table, especially when the ground isn’t rattling fast.

There are showers forecast for Ascot throughout the day and any ease in the ground certainly would favour his rivals more than him. The horse to back is EAGLE TOP.

John Gosden is having a fantastic season – as usual – and the selection is arguably the star of his yard along with his two superstar three-year-olds.

Eagle Top ran out an impressive winner at the meeting last year before running well in the King George V Stakes at Ascot last season when he just got caught for tactical speed and experience to finish a staying on fourth.

This looks his season to shine and he should be spot on after a prep race at Sandown, where he ran nicely for a long way before Frankie Dettori eased him down when his chance had gone.

MUSTAJEEB is a horse I’ve been waiting for all week to back in the Diamond Jubilee Stakes (4:20).

He landed the Jersey Stakes under a penalty over seven furlongs last season but is a fast horse that has the perfect mix of stamina and this six furlongs at Ascot looks tailor made for him.

Dermot Weld gave him his first run over the six trip at the Curragh in May and the horse, despite it being his first run of the season, looked completely at home over the distance to beat a decent field which included the likes of Sole Power and Maarek.

The market is dominated by the Australian sprinter Brazen Beau but he doesn’t look anything too special from watching re-runs of his races, although he is a bit of a winning machine.

The Wokingham Stakes (5:00) looks the usual puzzle to solve but a tiny bit of value may lie with the chances of ZARWAAN at 22/1.

He is dropping back in trip from tackling seven and eight furlong races and judging by the way he ran last time at Ascot (led but faded in the final furlong) that could be a wise move.

ORIENTAL FOX is worth siding with in the Queen Alexandra Stakes (5:35) due to the fact he’s facing lesser opposition and has course form in the book from last year’s Gold Cup.