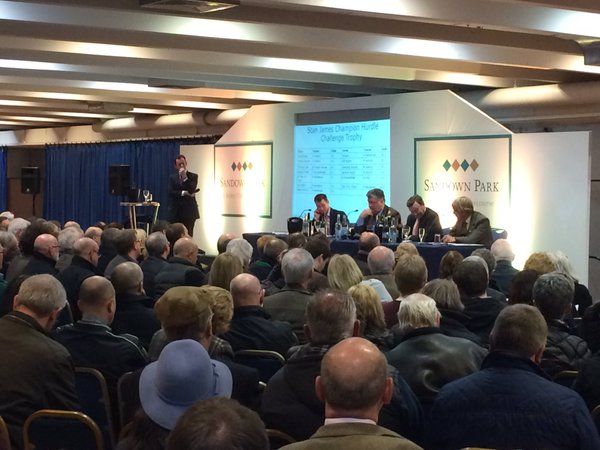 Nicky Henderson says of Vaniteux: “If we rode him to finish second, we’d probably finish second – *but we’ve got to try and beat this thing, haven’t we?” He seems very bullish of at least doing that, saying that the horse is in fantastic form and wouldn’t be disgraced if supplemented for the Champion Hurdle.
Paul Nicholls says that Old Guard worked “absolutely dire” this morning. “For whatever reason, he didn’t work very well. The girl who rides him was almost in tears. He usually works very well but for some reason he didn’t today, so we’ll just hope he is okay tomorrow and Monday.”
Henderson asks Nicholls if Irving is going to run in the County and he isn’t – which Henderson says would leave Sign Of A Victory with top-weight and makes him more likely to run in the Champion
Jockey bookings confirmed by Hendo for his five runners – as previously stated. MTOY – BJG Hargam – M Walsh Top Notch – Jacob (probably) Peace & Co – Nico (probably) Sign Of A Victory – A Tinkler
Henderson says that in an Aintree bumper four years ago, The New One beat My Tent Of Yours. “Does that tell us anything? Probably not.”
Henderson says “it’s not possible, I don’t think” that MTOY can win. He tells punters “not to forget Peace And Co – he’s a very good horse” but that “if it’s soft ground, when they straighten up, if Top Notch isn’t there, I’ll be very disappointed”
Le Mercurey could be “quite good value as an each-way shout” in the RSA Chase, although he warns “he wouldn’t want the ground to dry out too much”
Richard Johnson says he schooled More Of That over fences and was very impressed.*
Henderson fairly cold on the chances of Vyta Du Roc in the RSA – questions whether he is going to be quite good enough

Luck asks Nicholls what he made of Dodging Bullets’ comeback run at Newbury? “Fairly ordinary, to be honest,” he says. “He’s deceiving because he’s such a good workhorse at home you always think he’s going well, but I hope he’s coming back to himself and he’ll love the drying ground. Take UDS out and it’s a really interesting race, but if UDS performs like he did last time at Ascot, we could all be playing for second place.”

Richard Johnson recalls last year’s Arkle “I was riding a horse in the race that probably didn’t have much of a chance but that we knew would gallop and keep going,” he says. “After a mile, Ruby was just laughing at us. I think it’s going to be very hard for anything to take Un De Sceaux on from the start.”
Vibrato Valtat gets a strong mention from Nicholls for the Ryanair. “He’s a good horse. He won the Haldon Gold Cup easily, ran well in the Tingle Creek and was third to two Champion Chase winners in the Desert Orchid. He just needs that step up in trip now and the trainer has probably made an error running him over two miles for so long. He’s got a big chance.”

Andy Stewart says Felix Yonger will go for the Ryanair Chase instead of the Champion Chase – “I spoke to him earlier on and that’s what he said”
Far be it from me to question the reliability of anyone as a witness, but Stewart is certainly adamant that Felix Yonger goes for the Ryanair
“If I’m wrong, blame Wylie”

Nicky Henderson says he’s worried about Josses Hill going left-handed. “He’s better right-handed, but I’m going to try a little experiement with him in the morning.” Luck reminds him that Josses Hill was placed in the Arkle and the Supreme. That doesn’t seem to change NJH’s view.
Henderson also says: “If you asked my right-hand man Corky Browne he’d be adamant that Captain Conan will win. I’m not saying I agree with him. But he would say that.”

Nicholls positive about his World Hurdle pair, says they have been doing all of their work together and are both coming on nicely. “I think we’ve got two very good chances – our best chances of the week.”
Nick Scholfield will ride Aux Ptit Soins.

Saphir Du Rheu’s owner Andy Stewart says that “according to my source Tom Segal” the time his horse did winning the Cleeve last year “even when allowing for the going is 19 seconds quicker” than the time done by Thistlecrack in the same race this year. A matter of some conjecture, but an interesting point nevertheless.
On the other hand, Johnson says that Thistlecrack is “an absolute certainty”.
Henderson agrees that Thistlecrack is going to be “very hard to beat”, puts in a good word for Cole Harden, and then says his Whisper “has a very good chance of getting a place”. Bobs Worth also runs for the trainer. “He’s won three different races at the Festival and we’d like to win a fourth. This could maybe be his last race, but he loves the place and he wants to come. He’s in really great form.”

Nicholls on his Triumph team. Zubayr “worked very well this morning with Tommie Silver – hope he can do a Zarkandar and keep improving – potentially one of the most exciting juveniles we have”; Connetable “Sam rides him, he’s streetwise and tough”; Tommie Silver “complete unknown – keeps improving, *but on his work this morning would have to improve”; Frodon “I think he’s a massive price – he’s a smart little horse, jumps and travels”. *Adrien Du Pont not quite right this morning and “may miss the race”.

Henderson on his pair: “We could be getting towards good ground on Friday and none of mine would want that. They’re nice horses, perhaps not as good as last year’s, but they have futures. Fixe Le Kap is a nice horse and Consul De Thaix is quite good too. I like him.”
Richard Johnson says he thinks he will ride Who Dares Wins in the Triumph. Does this mean Wayne Hutchinson will be on Sceau Royal?
Or Gibralfaro?

Johnson says a lot of the Triumph trials have been on horrible ground and he can see a surprise in the race – gives Who Dares Wins “a good each-way chance”.

Nicholls says he is sure Ruby Walsh will be on Vautour.

“It will be an interesting race but I’d dearly love to see Cue Card win for Colin and Joe.”
Back to the Gold Cup. Henderson says “Ruby won’t get it wrong” over which one he picks for the race. “I thought Don Cossack schooled very well the other day, I think Vautour is a serious horse who will surely be given a more patient ride, but the one I want to win is Cue Card.”
Johnson concurs. “Vautour is the best horse out of the two, but the question is his stamina.”
Andy Stewart says Friday should be “all about the Gold Cup” – “I can’t stop people from writing about what they want to write about. I just want to make sure the whole media don’t take it over. It’s got to be about the Triumph Hurdle, it’s got to be about the Gold Cup.” Stewart says: “This has taken over Victoria’s life. I just hope she gets round safely and has fun.”
Nicholls, on the other hand, says: “Look at the front page of The Times today – she’s there and it can only be good for racing. We’re always talking about getting new people interested in the sport and this is exactly what’s happening. She deserves to take her chance.

She was completely dire at first but she has improved so much in the last three months. If we go out there with a sensible idea to try and finish fifth or sixth and anything else is a bonus, then she could have a lot of fun.”

He adds: “If the ground continues to dry out, he’s no forlorn hope to win.”
Johnson is also a supporter of the initiative. “There are plenty of people who aren’t riding as proficiently as her who take part, and I guarantee she’ll be one of the fittest.”

Johnson: “My best chance of a winner is probably Balthazar King. Of the handicaps, Kruzhlinin seems in very good form and is coming in fresh and well.”
Flag 18:20
Nicholls goes for Diego De Charmil. Not quite the dark horse we might have been hoping for.
Arpege D’Alene “will run very well in the Pertemps Final” too
Henderson mentions Whisper again. Pressed for a handicapper to mention, he says Grand Annual winner Lough Kent “does work very well”.
Andy Stewart – you perhaps won’t be surprised to know – says he is going “to go a little bit off-piste” and tips his runner As De Mee in the JLT.*
Luck: “As his trainer, can you offer any encouragement to Andy, Paul?” Nicholls: “No.”