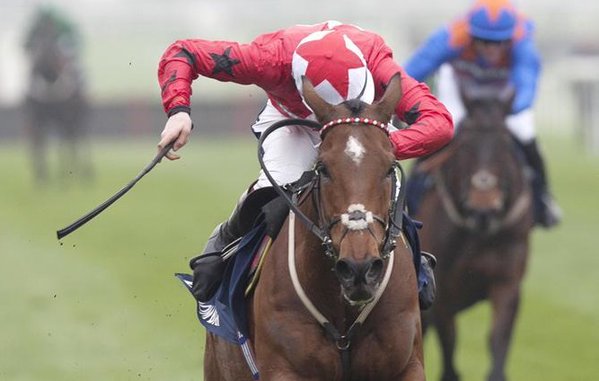 Sam Twiston-Davies gives thoughts on his rides and fancies for next week:

The New One is in great nick back at home, so this could be his chance and it would be great for everyone involved if he were to win a Champion Hurdle. It’s still not going to be an easy race as there are lots of solid horses to beat, while The New One definitely doesn’t have as much boot in him that he used to. We can’t get him any better anyway, he’s ready to go.’

‘It’s a winnable Champion Hurdle for six or seven horses but having to give Annie Power seven pounds is always going to be tough. She’s a mightily impressive mare and although she’s had her problems, she seems to bounce back in good form.’

8/1 for Willie Mullins to train a Cheltenham winner:

Willie Mullins had eight winners at last year’s Festival and is 1/500 to train a winner this year so the 8/1 boost looks pretty tasty to be fair. Only £5 allowed but its £40 in your pocket!

Dodging Bullets schooled well in the week before the Festival and he jumped really nicely. He showed plenty of his old enthusiasm which was great to see. He’ll look a totally different horse at Cheltenham, he’ll be a lot tighter and a lot fitter, and hopefully a lot sharper. The better ground will suit him, and you should never be afraid of one horse. Un De Sceaux looks very good, but we go there as reigning Champion Chaser and we have our fingers crossed that we’ll finish in the mix.’

Vibrato Valtat has been running well in all the top class 2m races, and he’s a horse who will benefit a little bit more at 2m 4f. He’ll spend more time in the race in his comfort zone. He sees his races out well, travels and jumps strongly. We’ll ride him a bit more patiently then last year, let him jump, let him travel, keep the sail down, turn for home, light him up and let him go. He’s rated 161, has some real solid form and is a very good horse on his day so we’re hopeful.’

I’ll be riding Saphir Du Rheu instead of Aux Ptits Soins in the World Hurdle. Aux Ptits Soins won a Coral Cup off a mark of 139 at last year’s Festival but comes into this year’s event without a prep run. If any trainer is going to get him there with a winnable chance it is going to be Paul Nicholls, so I could look very clever or very silly with my pick.’

‘My theory is Saphir Du Rheu has been there and done it before. He was a tidy second in this race last year and we’ll be a bit more forward this year. Cole Harden had a nice time of it last year, kicked off the last bend and we couldn’t peg him back. This year we’ll ride Saphir Du Rheu a lot closer. He’ll jump and travel and do the right thing, we just have to hope he can come back from a disappointing run last time out.

Thistlecrack is rated 168, has beaten a lot of good horses in an impressive manner on the way to Cheltenham, and has looked very good all the way. But the Cheltenham Festival is a different kettle of fish. Thistlecrack has got some very strong form and will be the one to beat, but I’m happy to be on Saphir Du Rheu’

Smad Place took apart the Argento Chase last time out, traveled and jumped well, and did the same in the Hennessey Gold Cup in November. Don Cossack didn’t come off the bridle when winning the Jnwine Champion Chase at Doncaster in October so you have to be taken by what he’s done. Don Poli has beaten everything that’s been put in front of him without ever being particularly flashy, and then you watch the King George between Cue Card and Vatour and it takes your breath away. I can’t pick a winner, but I also can’t wait to watch it!’