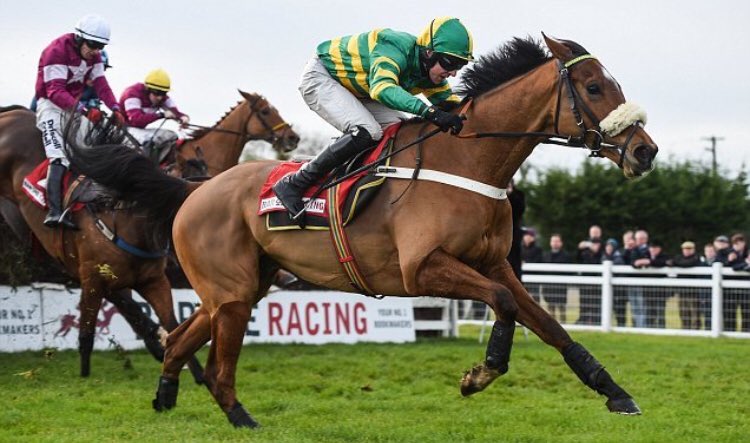 All eyes fall on Berkshire on Saturday for the Betfair Ascot Chase – a race where the Ryanair Chase market is likely to get a huge shake-up. Lewis Jones wants to nick some value before that shake-up occurs…..

Un De Sceaux is a weak favourite at 5/2 and there is likely to be hefty movement in the market following this weekend’s Ascot Chase, where four horses in the top 10 in the betting are set to clash.

There’s a chance to get ahead of that market shift. At the prices, and with the non-runner no-bet guarantee on offer, the horse worth backing for the Ryanair Chase ahead of this weekend is Coney Island, who looks a tasty punt at 8/1.

Despite this race being jammed packed with quality, the most talented of the bunch could well be Coney Island. This progressive seven-year-old hasn’t been rushed by his trainer Eddie Harty – in fact, his run this weekend at Ascot will be just his fifth over fences. He has the look of a horse that has more to come, which you can’t say about most of his rivals at the head of the Ryanair market.

A Grade One-winning novice chaser last season following an emphatic victory in the Drinmore Chase, he then improved again to run Disko and Our Duke to within a half-a-length in the Grade One novice chase at Leopardstown last Christmas.

That day he proved his staying power, which is another positive for his chances in the Ryanair as the stats show you’re much better off backing a horse dropping back in trip from three miles rather than stepping up from two, due to the fast-run nature of the race where stamina comes to the fore up the hill.

Coney Island returned at Ascot in December when giving Adrien Du Pont 11lb and a nine-length beating. He is now rated 162 and you get the feeling that his team will leave the decision about what race to run in until the last possible moment.

If he was mine, there’s only one place he’d be going and that’s to the Gold Cup – for which he is also an 8/1 poke – but Harty seems very open in running in the race the horse has most chance of winning. That race could well be the Ryanair, especially if he beats or runs his market rivals close this weekend.

Harty said: “He’s in the Ryanair and Gold Cup and I’ve an open mind as to where we go. I’ve no preference.”

The risk surrounding this bet at 8/1 is minimal. If he runs in the Ryanair, there’s no way his price will be 8/1 on the day as he’ll go there having run well at Ascot – that opens the possibility of trading out.

If he bombs out at Ascot, they won’t take him to Cheltenham, meaning you’ll get your stake back. Furthermore, if his connections decide that the Gold Cup is the race for him, your stake will be refunded.

Back him, and you’ll be in a strong position or be getting your money back in a few weeks.

[wpsm_titlebox title=”We are committed to responsible gambling” style=”2″]
Over 18’s Only. These are our opinions only, selections are not guaranteed to win. Please gamble responsibly.
[/wpsm_titlebox]