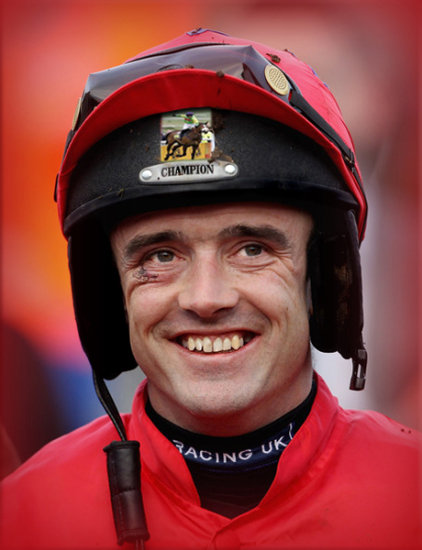 One of Irelands’s finest, Ruby Walsh is certainly a Cheltenham favourite -Can we expect another bumper Festival for the Mullins-Walsh team?

Style of Riding: The perfect tactician

One word to describe him: Winner

The Northern Irishman wrote himself into the record books in 2010 when he became the most successful jockey in Cheltenham Festival history and his ruthless domination of the four-day extravaganza has yet to flag.

Known as one of the greatest horsemen in recent history, his sensational 38 festival wins is 10 more achieved by his great rival A P McCoy and his four wins in 2013 sent him to the top jockey honour for the seventh time.

Walsh has everything a punter, trainer or owner would want from a jockey to give their horse the best chance of running to its potential.

His strength and coolness under pressure are traits widely recognised by his employers, but the main attribute that stands Walsh out from his rivals like McCoy and Barry Geraghty is his immaculate timing in the saddle.

Walsh has an uncanny knack of being in the right place at the right time more often than not when horses are accelerating up the famous Cheltenham hill. A master of his trade, Walsh’s tactical brain and reaction skills continue to defy belief every year at Prestbury Park.

There’s too many to recall and each analyst would probably give you an example of a different ride to the next.

The two Gold Cup wins on the enigma that was Kauto Star would be high on many purists’ lists and it’s hard to forget the ride’s he gave Fiveforthree in the 2008 Neptune Investments Novice Hurdle.

Some of his most memorable efforts have come on frontrunners, most notably when he made-all on Champagne Fever in the 2013 Supreme Novices Hurdle, achieved in the same riding style as he did aboard Celestial Halo in the 2008 Triumph Hurdle. Both were majestic efforts.

His relationship and four wins aboard World Hurdle maverick Big Buck’s is hard to erase from the memory as is his similar winning connection with Mares Hurdle legend Quevega.

His ride in 2013 aboard the Willie Mullins-trained superstar, in particularly, was a very special moment as despite not travelling with her usual zest, Walsh took his time and slowly but surely produced her to win an incredible fifth straight Festival race. It was the prime example of why Walsh is a cut above.

Well, it may sound a bit of a cliché, but Walsh is at his best on champion performers, which can’t always be said of some of his rivals in the weighing room.

Of his 38 festival winners, 36 of those have been provided by the powerful stables of Willie Mullins and Paul Nicholls. Blowing Wind, trained by Martin Pipe, and Dun Doire for Tony Martin were Walsh’s other two successes

With Walsh’s decision to stand down from his role as stable jockey to Paul Nicholls’ owing to wanting to spend more time with his family in Ireland, it will be interesting to see whether the Ditcheat-based handler decides to provide Walsh with his first-string in March or place faith in his new number one Daryl Jacob.

Quevega will probably be the shortest price of his ride’s as she bids for a sensational sixth straight Mares Hurdle, while the power of the Mullins novice chasers this season looks especially strong.

At this early ante-post stage though, it may be worth siding with Briar Hill for the Supreme Novices Hurdle at 12/1 – a race that Walsh has won twice in the last three years.