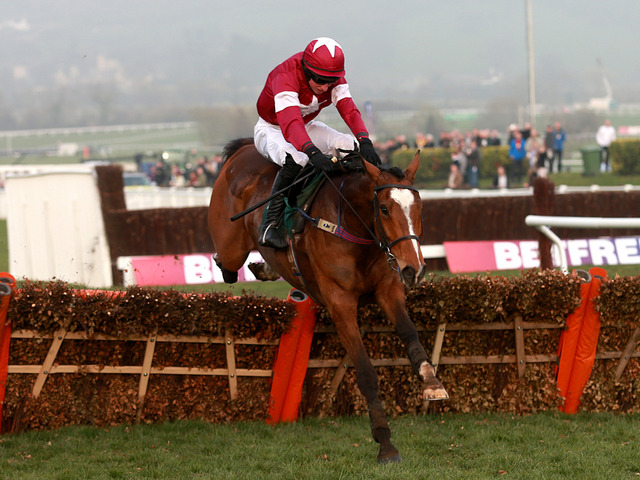 Willie Mullins has yet to really nail which mast Don Poli’s colours will be nailed to in terms of Cheltenham Festival target, but he’d be mad to bypass this race for the four miler.

Don Poli looks ready made for a three mile slog around Cheltenham.

Already a festival winner courtesy of his win the Martin Pipe Conditional Handicap last season, punters have been queuing up to take short prices on this beast following his win in the Topaz Novice Chase at Leopardstown over the Christmas period.

He looked the real deal that day, jumping straight as a ruler throughout while showing great battling qualities after being headed by Apache Stronghold in the last 200 yards.

That form looks very strong with the second going onto win next time out at the top level after being dropped in trip.

Coneygree (Odds 4/1):
Such is the high regard that trainer Mark Bradstock holds this horse in, his participation in this race not assured as the trainer is tempted to throw him in for a crack at the Gold Cup.

He showed his credentials for that race when thrashing his elders in the Betfair Denman Chase. Jumping with excellent precision, he had some very talented rivals like Unioniste, Taquin Du Seuil and Harry Topper on the stretch from an early stage. The further he went the easier it became and he ended up winning by seven lengths.

Before that the seven-year-old had won the Kauto Star Novices Chase at Kempton at Christmas.

Kings Palace (Odds 4/1):
David Pipe has always thought the world of this horse and he comes to Cheltenham, like the top two in the market, unbeaten over fences, winning all three of starts.

He has yet to be tested in Graded company though and fell when beat when going off 5/2 in the Albert Bartlett last season.

The Young Master (Odds 7/1):
Making his way up the ladder through the handicaps isn’t the usual route for an RSA contender but that’s the way The Young Master has got to this level.

He rounded off a hat-trick of wins at Ascot in December, beating Houblon Des Obeaux by just over two lengths.

Although not the best jumper, he has a massive engine and it will be interesting to see whether he can make the step up to Grade One level.

It’s very hard to pick holes in the form and make up of both Don Poli and Coneygree for this RSA Chase test.

They are both very battle hardened for a pair of novices and will take a lot of beating. Gun to head?

I would side with Don Poli but only because it’s terribly hard for frontrunners like Coneygree to win from the front at the festival. Kings Palace is the weak link in this race and is remarkably short at 4/1.

He has only won three egg and spoon-like races over the big obstacles and yet to be in a battle unlike the other pair. It’s worth remembering he was also stuffed in the Albert Bartlett last season, when he clearly didn’t handle the hustle and bustle of Cheltenham. Place lay.