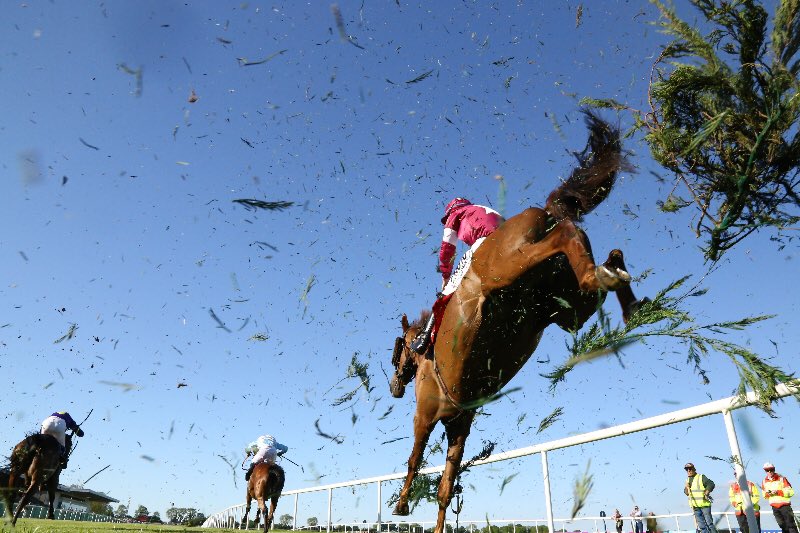 Sizing John dug deep to deny Djakadam yesterday in a belting Punchestown Gold Cup and I’m hoping we’re up for more of the same excitement Thursday.

We’re already into Day Three at the Punchestown Festival and it looks another cracking card.

The opening race is a 25 runner 2 mile handicap hurdle. Le Vagabond, Bobabout and Here for the Craic all look to have good chances in this but the one I’m going for is the Tony Martin trained SWEET COMPANY at 6/1.

This is a horse I know very well. I got word that he was strongly fancied at Galway last July in a Flat race. He got up to win on the line at very generous odds of 25/1 then.

This horse is a bit of a nut case as I found out that day when he nearly ran over everyone in the parade ring after winning, he does have plenty of ability though!

He was 3rd on his next run at Listowel over hurdles and was a shade unlucky then as he tried to jump the side railing two out.

He’s had two nice prep races for this on the flat recently. He was a very fast finishing 4th at Cork 12 days ago when last seen. It should have put him spot on for this race and he sneaks in off bottom weight today. This horse is very well handicapped over hurdles and fences.

He does have a mind of his own but I think if he doesn’t pull Denis O’Regan’s hands out early he’ll go very close to winning this handicap.

I think he could run up a sequence of wins this summer en route to the Galway festival.

Race two the 4:20 is a 2 mile handicap chase with 15 runners to trouble the judge.

This race has got some classy horses and some others on the upgrade. Don’t Touch It looks the class act in this race. He won the 2 mile Grade 1 novice hurdle at this festival last year beating some good horses including Petit Mouchoir and Yorkhill.

He’s taken well to fences this season and his 2nd to Great Field in a graded race looks like top form. He gave weight away to all last time out on handicap debut and only found Hurricane Ben too much for him then.

He’s a lot better off at the weights with that one today and will no doubt reverse the placings. Jessica Harrington had a decent day yesterday with two winners and this one could well give her another winner.

Her other horse Mr Fiftyone has been placed in this race in the past.

He’d have a decent chance based on his run behind Fox Norton at Cheltenham in October. Sizing Platinum finished in front of him that day but Mr Fiftyone is better off at the weights today.

Robbie Power who is in flying form chose to ride Mr Fiftyone over Sizing Platinum too. Of the Harrington duo I’d say Don’t Touch It has the best chance bot Mr Fiftyone has a place chance. The Elliott duo also have good chances.

Third Opinion won well last time out at Clonmel but this could prove too much of a step up today. Potters Point is the dark horse in the field. He beat Don’t Touch It by 4l in a bumper her a few seasons back.

He’s been lightly raced since. Won both of his starts this season and has the potential to be better. He beat a Jessica Harrington horse called Flaviana last time out. That horse is not in the same league as Don’t Touch It over fences.

I rate the Cheltenham winner Tully East the biggest danger but I really like the chances of DON’T TOUCH IT in this race at 5/1. 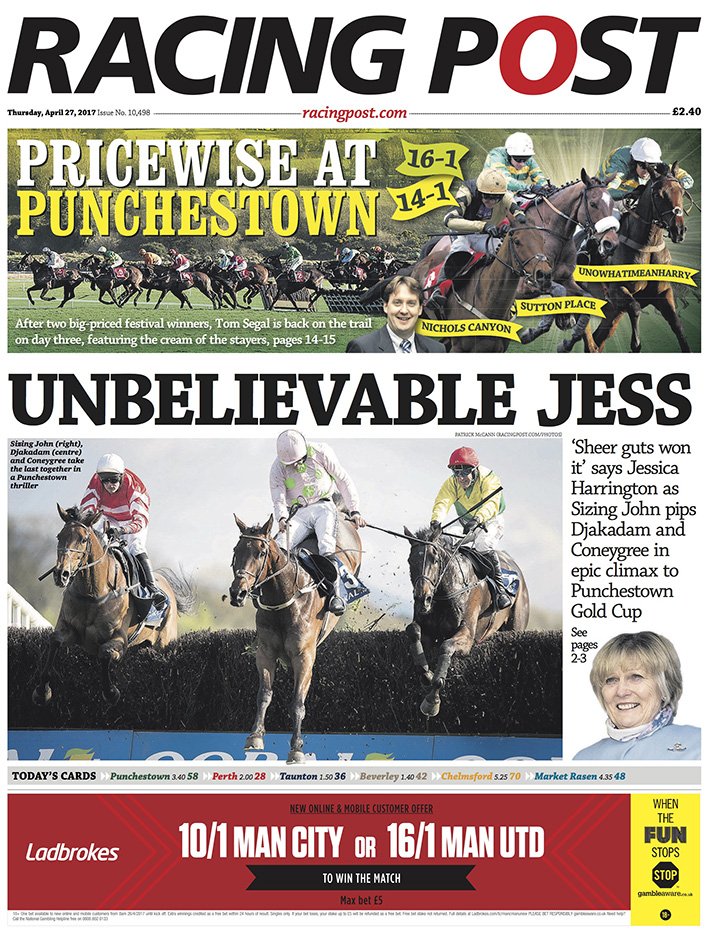 It’s always one of my favourite races of the week to watch. Risk Of Thunder won this race several times in the past for Enda Bolger and he looks to hold all the cards in this race yet again with the first two in the betting. Cantlow has taken really well to these banks and he ran a cracker when 2nd in this last year. He was well ahead of today’s rival Mtada Supreme then.

Ran another good race when 3rd to Cause of Causes in the Cheltenham Cross Country race in March. The winner since went on and placed in the Aintree Grand National.

CANTLOW isn’t much of a price at 4/7 in this race but I cannot see anything beating him.

This form top class flat horse wasn’t expected to see out the trip then but he was strong in the finish then. Unowhatimeanharry was the odds on favourite that day having won his previous eight races over hurdles. On the day he had no excuses, he was just beaten fair and square.

He’ll have to improve again to turn the form around today. Nichols Canyon is unexposed at this trip though and could well have more to offer. I think it will be a great finish between the two again but I think NICHOLS CANYON will confirm the Cheltenham form and I’m on at 5/2.

The 6:05 is a 3 mile handicap hurdle with 25 runners going to post. I’ve managed to narrow this down to five horses.

Those being Minella Awards, No Comment, Oscar Sam, Sutton Manor and Woods Well. The U.K trained No Comment and Minella Awards finished 1st and 2nd in a bumper at this festival a year ago. No Comment won well that day and gave the runner up plenty of weight. Both have turned into decent hurdlers.

I think No Comment could confirm the placings with the two again today but they both have good chances. Oscar Sam looks the best of the Jessica Harrington runners in this.

This horse has to carry a lot of weight but I think he could well be better than these. He could well be a future graded winner. This horse ran a stormer of a race when giving away lumps of weight when last seen in February. He was 3rd in a qualifier for the Pertemps Final. The runner up that day Sutton Manor was getting 22lb from Oscar Sam.

Today there is a major change around in the weights with Oscar Sam 14lb better off. The horse that came 4th in that race was Presenting Percy who won twice since including winning the Pertemps hurdle over Sutton Manor. Bryan Cooper has chosen to ride Woods Well over Sutton Manor today. This horse has been running solid races in novice hurdles this season.

He was badly hampered on handicap debut last time out and had to pull up. I’d ignore that run. He’ll go well today given a clear run at a big price. I’m going to side with OSCAR SAM though.

He is sure to have a great chance based on the form of its last run and the yard and jockey is in flying form and I’m happy to chance my arm at 11/1.

The 6:40 is the Grade 1 Ryanair Novice chase due to be run over 2 miles. Great Field is by far the best horse in the race. It’s been very good over fences this season as a novice.

It’s won by a wide margin on its last three starts over Mall Dini, Don’t Touch It and Hurricane Ben, but my only worry with this horse though is it’s jumping.

His jockey was very lucky to stay in the plate in each of its 3 wins this season. This horse’s jumping is not for the faint of heart. No doubt he has the ability to win this but his jumping is a big doubt especially around here. The fences are much stiffer.

If I were to back him it would be with a faller insurance. Ordinary World has placed behind some top horses this season over fences including Min, Identity Thief and Altior last time at Cheltenham. He usually finds a few too good though.

If anything did happen to Great Field he could be the one to pick up the pieces.

I highly rate the chances of Ballyoisin in this race. He looked like a future champion when beating Townsend by 6l two runs back and would have won bar a 3rd last fence fall last time out from next time out winners Ball D’arc and Tully East.

This horse has jumping issues like Great Field but I think this one is the safer option of the both jumping wise plus with 3 places each way BALLYOISIN looks the value bet in the race at 7/1.

I won’t go into too much detail on the last two races on the card but I do like the chances of Nicats Benefit at a huge price in the 7:15.

This horse had some decent bumper form and is on the up. Won nicely at Clonmel last time out too. At 40/1 NICATS BENEFIT could grab a place.

The final race on the day’s card the 7:45 is a 2 mile bumper. Midnight Stroll looks to have a good chance but the one to be on is the Willie Mullins trained NEXT DESTINATION who was a solid 4th to Fayonagh in the Cheltenham bumper.

The first three from that race all boosted the form next time out.