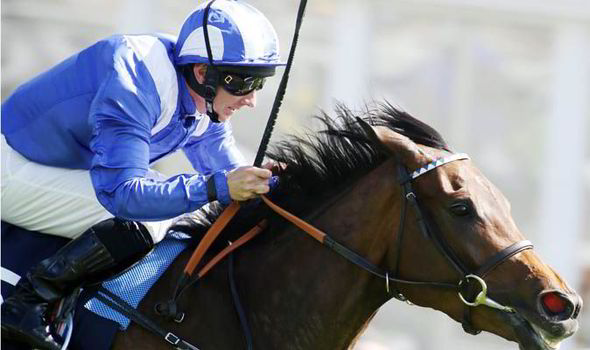 Tipster Lewis Jones is bouncing off the walls with excitement as the Glorious Goodwood festival is just one day away. The Sussex showpiece has to take a back seat today though as Lewis is following a horse at Windsor, who looks to have very strong claims.

Windsor host a decent card this evening and Si Señor looks best bet material in the Daily Unibet Early Prices from 9am Handicap (7:35).

Ed Vaughan lightly raced charge, unlike most of rivals today, should relish the one mile trip having already won over the distance on the all-weather earlier this season.

His mark is very workable for his turf debut and Vaughan usually has a good handle on his horses when they switch surfaces.

The selection hasn’t been seen for 83 days but that shouldn’t be an issue as his record suggests he is at his best when fresh.

He looks the most likely so the 9/2 available rates as a juicy bit of value.

Get on with a one point win stake.

Looking back to the weekend, and it was one that was ultimately dominated by super filly Taghrooda, who announced herself as one of the best middle distance three-year-olds of the last decade with her win in the King George VI and Queen Elizabeth Stakes. In race that history showed that three-year-old fillies struggle to fire in, John Gosden’s Oaks winner put that philosophy to bed with a scintillating showing against her elders.

With two furlongs to run it was clear Paul Hanagan was going best of his rivals on the filly, whose relaxed and professional attitude is on a parallel with her sire Sea The Stars.

Nothing fazed him and the same can be said about his star daughter. Hanagan released the handbrake and swept past Eclipse winner Mukadraham and Hardwicke Stakes victor Telescope with supreme authority. She now has sights set on the Lancashire Oaks at the Ebor festival at York and then perhaps a tilt at the Arc, where three-year-old fillies excel.

If I was a bookmaker, I wouldn’t want to be laying too much of the 9/2 available and those that have held that best price must be seeing plenty of action.

If she goes for the race, then looking at the make-up of the race, along with her supreme talent, it’s easy seeing her going off a 9/4 poke. Get on now would be my advice.