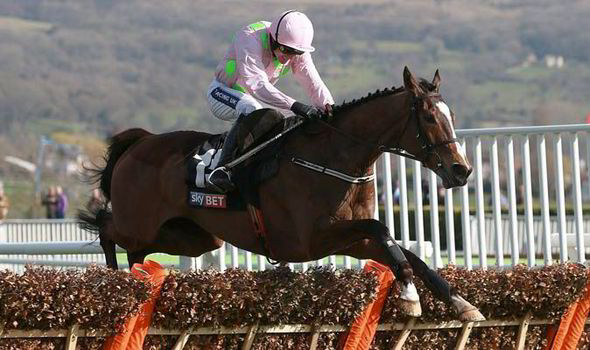 Vautour (Odds 9/4): Last year’s Supreme Novices Hurdle winner has switched to fences this year with a big reputation but has yet to set the world alight. Willie Mullins’ classy customer was imperious in the Cheltenham opening act last season yet doubts are now starting to do the rounds about what he actually beat and if he’s a true top notcher.

He started the season well when hammering the well-regarded Clarcam in a novice chase but that horse then turned the form around when it mattered in a Grade One at Christmas when Vautour made two serious jumping errors.

Mullins decided to give him a confidence booster at Leopardstown in January to blow away any cobwebs and he won well there in a very weak race in comparison to this. We have yet to see the true potential of this horse but it’s possible that back at Cheltenham he may unleash his best form.

Ptit Zig (Odds 4/1): Paul Nicholls’ star was 4-4 over fences until taking a fall at Ascot when taking on his elders in the Ascot Chase. It speaks volumes about the horse’s ability that he was thrown into a race of that quality and despite the fall his reputation still remains intact. Has good course form over the bigger obstacles at Cheltenham, beating Champagne West in a truly run race in the Dipper Novices. We may look back on that form next year as incredibly strong if both the front two do what I’m expecting them to do over the bigger obstacles in the next 12 months.

Apache Stronghold (Odds 11/2): Got his revenge for an eight length Drinmore Novice Chase defeat to the classy and brilliant jumping Valseur Lido by staying on strongly under a quite sensational ride by Paul Carberry in a Grade One at Leopardstown last time.

However, Noel Meade’s horse never really jumped a fence that day and was close to being tailed off at various stages. Such is his quality, he still managed to travel powerfully into the race over the last two fences and battle to get his head in front of his rival, who will repose again at Cheltenham and is also an 11/2 shot.

Intriguing race this one with all four of the market leaders capable of developing into high-class chasers next season.

With that in mind, Vautour looks a short price and he probably is the weakest Mullins favourite of the entire week.

He still has yet to impress with his jumping as has Apache Stronghold, who was beaten by Vautour over hurdles last season.

Meade’s runner is a talented beast but doesn’t look a Cheltenham type horse to me. Valseur Lido does look ready made for a Cheltenham test and jumps impeccably and he just about gets the nod over Ptit Zig, who fell last time out and backing last time fallers at the festival is the quickest way to the poor house.