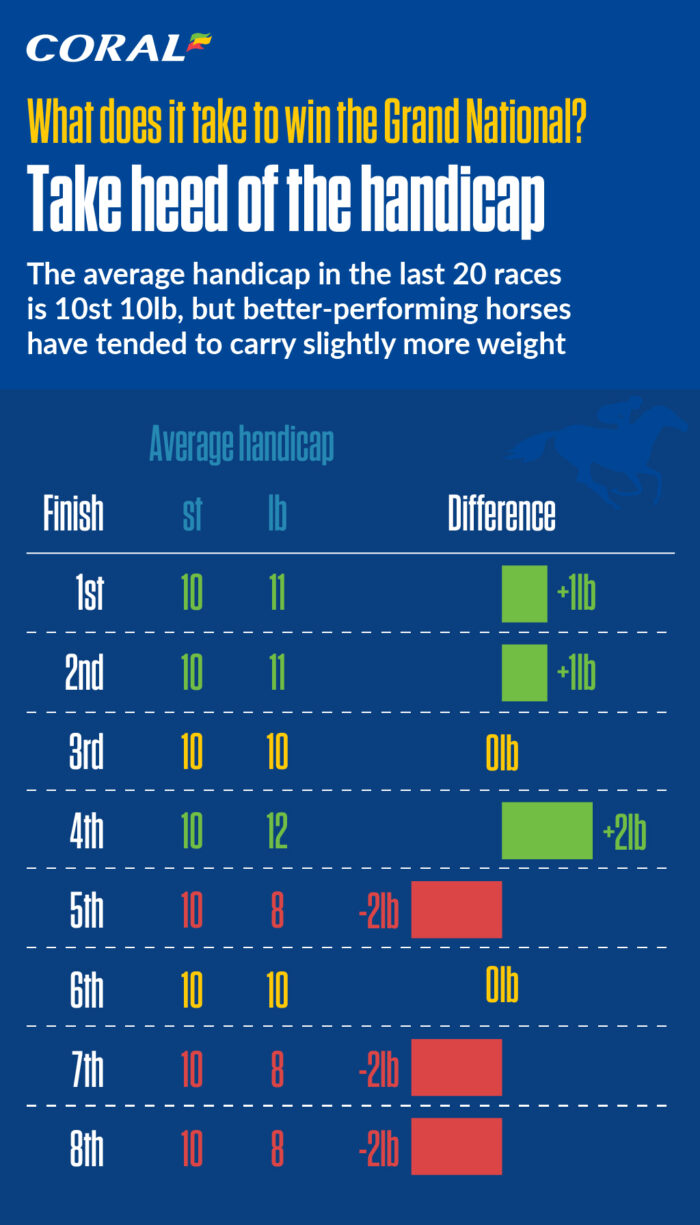 The Grand National is the most famous horse race in the UK, with millions of people – many of whom do not usually follow racing – betting on it every year.

Taking place over two laps of Aintree racecourse, it sees up to 40 horses trying to cover over four miles and 30 fences, making The Grand National one of the most challenging steeplechase races in the world.

Here, we’ve distilled the data from the last 20 Grand Nationals, and created a simple Grand National predictor, to help you place a bet successfully.

Take heed of the handicap with our Grand National Predictor

The Grand National is a handicap race, which means that horses judged to be better will be assigned a heavier weight to carry.

Whoever is setting these weights clearly has an eye for a horse as those finishing first to fourth tend to be carrying more on average than those behind them.

Over the last 20 races, the winners and runners up have had an average handicap of 10 stones and 11 pounds while those finishing fifth have carried around three pounds less.

Therefore, our grand national predictor statistics suggest it’s better to avoid a horse assigned a lesser weight unless your research indicates they have been underestimated.

In such a chaotic race it’s hard to predict a winner, even if you’re a bookmaker. Over the last 20 races, only a third of horses priced as favourite (or joint favourite) at the start have ended up placing.

The same is true for those listed as second favourites but this level of success is as good as it gets in the Grand National.

Being priced as the third favourite has been something of a jinx, however, with Teaforthree in 2013 the only horse of this rank to place in the last 20 races.

Our grand national predictor statistics suggests having the eighth best price has been something of a protective charm, with over two-thirds of these horses lasting the full distance.

Age is more than a number

Such a gruelling race requires the optimum mix of youthful energy and steeplechase experience but where is the sweet spot, what does our grand national predictor statistics suggest?

Over the last 20 years, horses aged between six and 14 have entered the race but the scale is definitely tipped towards younger competitors.

Eight-year-olds have fared best of all, with the highest proportion of entrants placing (12%) and completing the course (43%).

If you are of the opinion that experience counts for more then an 11-year-old horse is worth a look: these have collectively fared better than nine and 10-year-olds at both finishing the race and doing so as one of the first three to cross the line.

Tracking the trainers with our Grand National Predictor

A good trainer is of paramount importance in preparing a horse for the rigours of the Aintree course but which of the most prolific candidates has the best record?

We’ve looked at every trainer who has provided at least five horses over the five most recent races and then examined their entrants’ performance over the last 20.

Three names stand out for having seen more than 18% of their horses place: Gordon Elliott, Jonjo O’Neill and Tom George.

Elliott has produced three winners in this time period: Silver Birch in 2007 and then Tiger Roll in both 2018 and 2019.

He is also second only to David Pipe in training horses capable of completing the course, with both men managing this more than half the time.

Judging the jockeys with our Grand National Predictor

We can apply a similar approach to discover which jockeys are the most assured at guiding a horse through the perils of Aintree.

There are 11 who have ridden in at least three of the last five Grand Nationals and again we can compare their records over the most recent 20.

Davy Russell’s two recent wins on Tiger Roll in 2018 and 2019, plus his third place on Saint Are the year before, give him a one-in-five record of placing at the Grand National across his 15 attempts.

Injury kept him out of the 2021 race but if he returns in 2022 then he will surely be targeting a third win.

Paul Townend, meanwhile, has not enjoyed his time at Aintree so far, with only two of his 10 attempts to win the Grand National even seeing him cross the finish line.

A splash of colour

The Grand National is perhaps the one big race on the calendar where it’s acceptable to abandon sober analysis and pick a horse based on gut feeling.

A popular decider is the jockey’s colours, so we’ve taken a look at how silks of different shades have fared in the last 10 races.

Our grand national predictor suggests the luckiest colours in recent years have been white – which has adorned eight of the last 10 winners – and yellow, which has been worn by five.

Both colours have also seen their wearers place first, second or third more than 10% of the time.

Pink – not to be confused with purple – is one of the rarer but safer picks, as the only silk colour with a better than 50% record of completing the course.

However, only one jockey wearing pink has placed in the last decade: Cappa Blue crossed the line second in 2013 with rider Paul Moloney’s blue jersey featuring a pink hoop.

The colour to avoid is black or grey, which has seen fewer than a third of horses even finish the race, never mind challenge at the front of the pack.