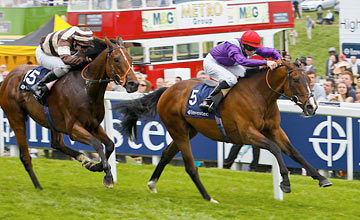 Lewis Jones gives us his thoughts on the undercard at Epsom today for their Oaks meeting. He’s got two bets lined up, both at double figure prices….

Clon Brulee must have a fair chance of defying a mark of 99 on his first outing of the season and his first start in the UK since Godolphin decided to fork out 200,000 guineas for his services from David Barron.

Rarely do the boys in blue throw money down the drain and this looks a horse with scope to perform at Group level when everything drops right.

He landed a valuable race at the back end of last season for Barron at Doncaster when seeing off Tha’ir and Conduct in classy fashion. The latter came out and hacked up to win the November handicap giving the form a nice look to it.

The selection has never raced at Epsom, which is a bit of a worry but Kieron Fallon, who is a master around the Downs, booked for the ride, he is well worth a play at advertised odds of 10/1 in the Investec Wealth & Investment Handicap (2:10). Get on with two point each-way stakes.

Highland Knight is impossible not to back at double figure prices in the Investec Diomed Stakes (2:45).

Andrew Balding’s charge may have to carry a penalty for a previous Group Three win but when he gets an easy lead on a tight track like Epsom, he’s a very hard horse to pass.

This renewal doesn’t look the strongest on paper with Gregorian a quirky sort and Graphic not getting his ideal boggy conditions. Course form is like goldust at Epsom and the selection has a second and a win to his name in very competitive handicaps.

On both of those occasions, he was ridden prominently to great effect and I’m hoping the result will be the same today. Take the 14/1 on offer with two point each-way stakes.

Those that like backing short prices in handicaps (not my kind of thing) will be rubbing their hands together at the prospect of following in Abseil in the Investec Mile Handicap (3:20).

This horse looks to have everything going for him off a mark of 92.

There was a huge plunge on him for the Royal Hunt Cup at Royal Ascot last week and he needs to win this well to get in. Looking at his previous starts, he is a Group winner in a handicap and he should romp in.

The 2/1 on offer though mirrors that and why I won’t be officially recommending him as a bet.