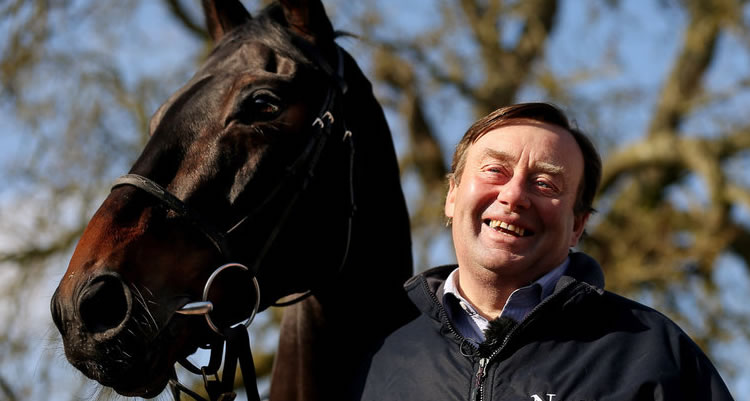 Lewis Jones correctly predicted yesterday that the odds-on favourite Churchtown would get beat at Chepstow but tipped up the wrong challenger as his tip Macadamia ran well but could only finish fourth. He’s putting that behind him though and is hopeful that today’s selection can get him off the mark following the start of the new P+L column…

We’ve become accustomed to witnessing plenty of Paul Nicholls v Nicky Henderson match-ups over the last few years and the Carter Jonas Handicap Hurdle at Newbury today is another chance for the two heavyweight trainers to trade blows with each other.

You get the feeling that both of their runners are fancied to reach the higher end of the National Hunt game with Henderson’s Volnay De Thaix finishing close up behind Irving last time out and Nicholls’ Dormello Mo romping away with a handicap at Sandown.

Of the two, our money is going down on the chances of the Henderson runner.

It was quite surprising to see Henderson swerve a Cheltenham Festival handicap with the horse as this mark of 138 looks to have plenty of scope for a horse of his ability.

He actually went off an odds-on favourite behind Irving in the Mitie Kennel Gate Novices’ Hurdle at Ascot and although he was well beaten by the classy speedster, he ran with great promise as he looked very inexperienced for a much of the way round before staying on powerfully in the closing stages.

It’s worth nothing he is only a 4yo too and he was by no means embarrassed and would have finished closer had he not been hampered at the last. He was made to look very one-paced as the race developed, however, and already appears in need of a stiffer test.

But his class should be enough to see him through today in a race which is likely to be run at a fair clip. The race looks a straight match between the pair but the Nicholls runner lacks any appeal purely on a handicap basis.

His win at Sandown was visually very impressive but he didn’t beat much and has been hiked a whopping 11lbs in the weights. He now has to race off 131 and the market vibes surrounding his chances haven’t been good this morning.

The faith seems to be with the Henderson runner at 7/4 and we’re recommending a TWO point win stake on his chances.