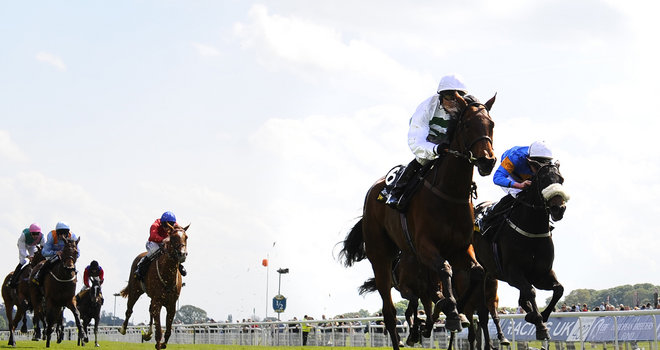 No luck yesterday as Hugo Palmer’s filly New Providence totally dominated Polar Vortex in the nursery at Doncaster, which was a surprise.

The booking of Ryan Moore was perhaps a tip in itself as his urgings suited the horse perfectly as he romped clear in the final stages after Polar Vortex looked to have perhaps stolen the race from the front. Palmer’s charge looks a horse to follow, especially on a softer surface, which should suit the horse even more.

Put it in your notebooks.

Moving onto today, and Double Up is where the money should be going today at Haydock for the very shrewd Roger Varian operation, who thrive when venturing up to Merseyside with their runners.

The Newmarket trainer has a 31 per cent strike-rate when sending runners on the 191-mile journey to Haydock and the selection is the key horse to concentrate on when assessing three of his runners tonight in the Amity Financial Solutions For Life Insurance Handicap (3:15).

The progressive three-year-old was thought of quite highly by the team at Varian’s stable at the start of the campaign but things haven’t dropped in the horse’s favour as yet despite showing some encouraging signs.

After winning his maiden on the all-weather at Lingfield, the money came for him to double up back at the same track in May. He failed to deliver despite going off 7/4 and pulled far too hard to run his race.

There was plenty of money for him to make amends in a 6f handicap on Polytrack at Kempton last time, but Double Up was forced to race wide with no cover from a high draw and could manage only second behind Johara. That was a career best though and he has only been bumped up 2lbs in the weights. He’s the one to beat at 5/2. Get on with a one point win stake.

The racing world was given a bit of a shock yesterday with the news that Oaks winner  is being lined up for the next Saturday’s King George VI And Queen Elizabeth Stakes at Ascot after her unexpected withdrawal from this weekend’s Darley Irish Oaks.

John Gosden’s filly was odds-on to make it a Classic double after her victory in the Investec Oaks, but owner Sheikh Hamdan Al Maktoum has chosen to rely solely upon his Epsom runner-up Tarfasha.

The superstar filly is trading around the 9/2 mark behind the very well backed Telescope, who was last seen winning the Hardwicke Stakes at Royal Ascot in fine fashion. An intriguing battle lies ahead.