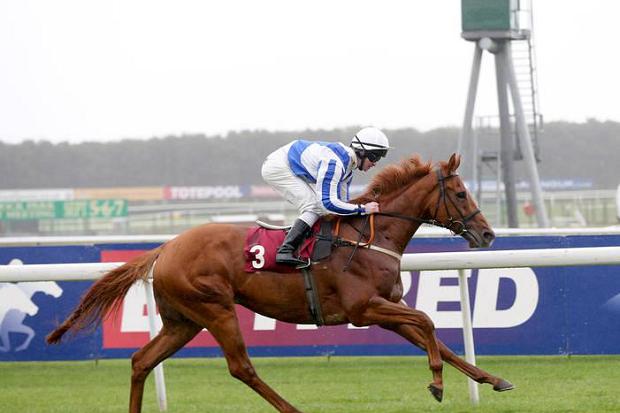 Lewis Jones has returned from Chester rather soggy after the rain yesterday and rather sleepy following two days of gambling and drinking, hence the late submission of his copy. He’s up and at ‘em now though and has an each-way bet to beat the bookies with…

Big Johnny D is a horse who big things are expected of this season and he can strike in the sportingbet.com Earl Grosvenor Handicap at Chester (1:45) for in-form trainer David Barron, who has had three winners from his last four runners.

This horse has pace to burn and will relish the soft ground from a fantastic draw in stall two. He had progressive 7f form last year, notably when completing a front-running hat-trick at Haydock in September and looked in need of a run when stopping quickly at Haydock on his seasonal reappearance, where he went off favourite.

Under the confident Graham Gibbons, he can bounce back and punters should be lumping on with two points each way stakes at 7/1.

Meanwhile, looking further ahead and excitement is growing for tomorrow’s racing with the Scoop6 jackpot estimated to hit £7.5m after weeks of winning tickets.

The Racing Post report that the combined pools are at an all-time high, with £3,296,563 in the win fund and a further £2,291,377 already in the bonus fund. Officials are predicting £4 million will be staked by punters on the pools and the bet could total £7.5m.

For those that aren’t aware of the Scoop6, the challenge is to select all SIX winners from SIX races during Saturday meetings.

A minimum stake of £2 is require per line and you can have more than one permutations by picking as many horses as you like per race but then obviously your stake will go up significantly. For example if you had two horses in each of the six races, your stake would be £2 x 2 x 2 x 2 x 2 x 2 x 2 = £128 outlay.

Tomorrow’s Scoop6 races are incredibly tough. Opening with a 14-runner 3m hurdle at Haydock, then moving on to Lingfield’s Listed Oaks Trial, then another Listed race, this time at Ascot.

The bet then moves to Nottingham for a 17-runner 5f sprint, before returning to Haydock for the Grade 3 Swinton Hurdle. If you get through all that then all you need to do is find the winner of the 29-runner Victoria Cup at Ascot. It’s as easy as that! In 36 hours or so you could be a millionaire! Make sure you are in it to win it.