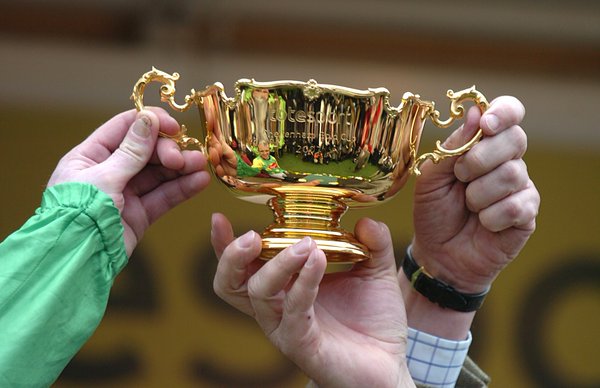 Apologies for the lateness of Friday’s tips but the Guinness has been flowing following THISTLECRACK’s immense performance in the World Hurdle.

The horse looks to have funded many a night in Cheltenham this evening judging by the empty bottles of Bollinger strewn about the place and victories for Vautour and Limini have put punters in buoyant mood.

Thistlecrack’s win was a highlight of the Festival, a real joy to watch. Colin Tizzard’s mount was simply magnificient and given us optimism for the final day of whats been a belting Cheltenham Festival.

The entire Cheltenham Festival has been a thrill to be fair.

That much it’s true.

But deep down all that has been brewing has been an urge and an excitement to get on the chances of DON POLI in the Gold Cup.

This is his race. He was born to win this contest.

Willie Mullins has amazingly never ever tasted success in the big race on Friday, but that looks set to change this season.

Don Poli has everything in his favour to win this unique contest.

He is a thorough stayer who has won the RSA Chase but also possesses the jumping ability to make a huge noise in the big one.

He finds his own way to get the job done and his two previous visits to the Festival have produced two emphatic wins.

Many will quibble at the level of his form, but this is a horse that doesn’t do convincing victories, but in reality not many lazy and slow horses achieve that.

Davy Russell, who won the race two years ago on Lord Windermere will saddle the Don, and as Mullins himself has said, this horse only just does enough and that shouldn’t be enough to put you off.

ZUBAYR should get the day off to a winning start in the Triumph Hurdle.

Paul Nicholls has a very strong line on the form of the juveniles this season having saddled the 1-2 in the Fred Winter on Wednesday.

The selection ran a stormer of a race at Kempton on debut and the vibes are strong that he’ll follow up.

Seeing Yanworth get beat in the Neptune was a huge shock but that shouldn’t put you off the chances of SHANTOU VILLAGE in the Albert Bartlett.

He was readily disposed by Yanworth in the trial race but looks a horse that should improve greatly for better ground and a longer trip.

Barters Hill will be tough to pass but his best form has come on softer ground and he can be taken on at the prices.

Richard Johnson has struggled this week but WAIT FOR ME has strong claims in the County Hurdle. He has got strong Cheltenham form and has looked a progressive sort over timber.

Call me crazy, but I fancy PACHA DU POLDER to run a sound race for Victoria Pendleton in the Foxhunters.

He’s a class act and should take Pendleton into the race as he’s a classy traveller. From there it will be interesting to see how she sends him home.

MR MIX looks well in on handicap debut for Paul Nicholls in the Martin Pipe Hurdle while ROCK THE WORLD has a solid chance in the Grand Annual.