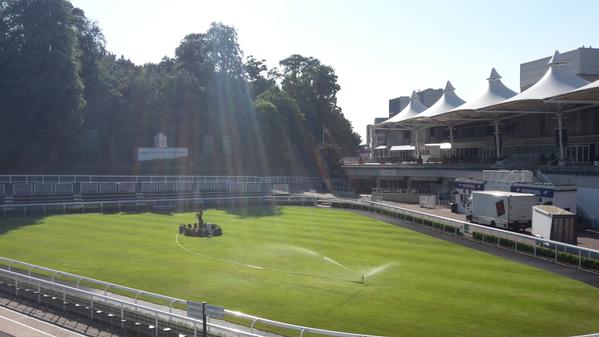 With the sun beating down, there are fewer more stunning places to be than at Samdown for Coral Eclipse day.

I’ll be there on Saturday lapping it all up and I’ve got a few bets on the agenda.

It’s best to start with the Coral Eclipse, which is, in truth, the worst betting heat of the day.

Derby winner Golden Horn is miles clear on the book judging by his impressive win at Epsom and subsequent franking of that form by Jack Hobbs in the Irish Derby.

Get Golden Horn at 5/1 to win the Coral Eclipse! Claim below:

He’ll win and win well but at 4/11 he is stupidly short considering he’s never raced against his elders and the race could be a tactical affair with only five runners.

I’ll be leaving the outright betting well alone but will be having a small play on Western Hymn in the without the favourite market (once the bookies price it up).

He is priced up at 20/1 in the outright market so should be available at around 5/1 when they do price it up. He certainly has what it takes to beat the second favourite The Grey Gatsby at Sandown, especially if the race turns into a dash three furlongs from home.

Yes, The Grey Gatsby had Western Hymn well beat at Royal Ascot but that was in a truly run 1m2f race – this will be a lot slower and the selection has the cruising speed and tactical pace to chase home his stablemate Golden Horn.

Furthermore, he is 3-3 at Sandown and is suited to small field races.

Another horse that is unbeaten at Sandown is Waady, who should take all the beating in the Coral Charge.

This horse looks very capable of competing in Group One sprints this season and should continue his upward curve at his favourite track.

He readily disposed of subsequent Commonwealth Cup fifth Profitable at the track last time out despite having to make his effort out wide.

His turn of foot is electric and a draw from stall 4 should make things relatively simple for Paul Hanagan to sit in behind the pace then strike at the two funding pole.

Of course, in five furlong races at Sandown, traffic problems are well found but this horse has so much dash that he should burst through the gaps with little problem.

Another horse to keep an eye is the Coral Challenge is Basem, who should be very hard to beat under a 5lb penalty with the in-form James Doyle in the saddle.

The selection won a very competitive handicap over course and distance last time out despite being his first run of the season.

He found a bit of trouble that day too and still managed to get his head in front under hands and heels riding from Doyle.

It looks as though they have mapped out a path through the handicaps rather than going straight for Group races and he should be hard to beat here.
Tips

Sandown 3:45 – Western Hymn in the without Golden Horn market 6/1