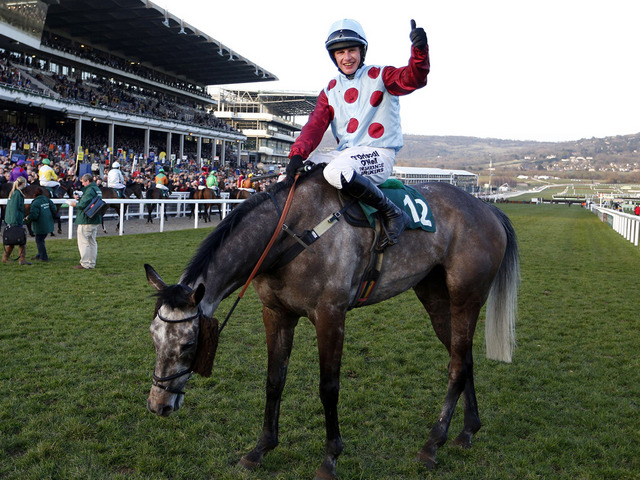 We’ve a cracking card at Cheltenham today as Saturday hosts the Paddy Power Gold Cup, and Lewis is back with his tips for from today’s card.

Wrap up warm, put the kettle on and get stuck in……

One of the early season highlights for all jump racing fans is the Paddy Power Gold Cup, a race that has been a high point of the autumn racing calendar, and this year’s renewal can go to IRISH CAVALIER.

The Rebecca Curtis-trained chaser has everything in his favour to suggest he could make up into a very top-class performer as the season progresses.

He’ll need to be of that class to win this race off a mark of 156 and there is plenty of evidence to think he will.

You can still pick up the 3/1 on offer below:

The two at the head of the market, Kings Palace and Boondoma, have been all the rage with punters in the build-up to the race, but I’m very keen to take both them on. Kings Palace has fluffed his lines twice at Cheltenham and looks a non-stayer to my eyes while Boondoma is a free-going sort who might be doing too much in the opening stages.

If anything the David Pipe second string, Monetaire, has a more appealing case if he’s anywhere the form of his second place finish in the Byrne Plate in March.

The selection is a Cheltenham Festival winner, which is an obvious starting point.

He somehow managed to survive a big mistake at the third last fence in the novices chase over this course and distance to power clear with that prize in March. Curtis then decided to pitch him into Grade One level at Punchestown and he ran a blinder as a 25/1 shot to finish closely behind Valseur Lido before being turned out just two days later in a 2m5f handicap and finishing a staying on second to Blood Cotil.

This race has been the target for the all horse summer and he showed he was on good terms with himself when winning his prep-race at Newton Abbot last month.

With plenty left in the tank, he shot to the front with two to jump and cosily pulled clear of Henryville, Art Mauresque and Cloud Creeper – a race which has been given a boost from a form perspective since.

Champion trainer Paul Nicholls trains Art Mauresque and Sound Investment and he has to be respected after winning the race last year with Caid Du Berlais while Johns Spirit is always a danger in these handicaps around Cheltenham. You can forget his run at Aintree last time when he was badly hampered by Rajdhani Express. He has a chance, but Irish Cavalier is the one for me at 10/1.

It could be a day for the girls if SHOTGUN PADDY delivers the goods in the Grade Three Murphy Group Handicap Chase for trainer Emma Lavelle.

The early prices of 14/1 look a bit of an insult to this chaser who looked a top-notch prospect when winning a valuable staying chase as a novice at Warwick before just being edged out in the four miler for novices at the Festival.

Things didn’t go to plan last season but he’s dropped to a mark just 2lbs higher than his Warwick win and he’s a very interesting proposition.