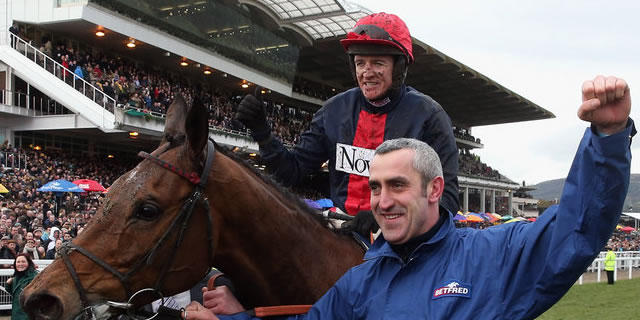 We have taken a look at the ante post markets for the Gold Cup and found a 25/1 shot to go to war with….

Cheltenham is a unique test for a horse, especially the Gold Cup track.

There’s a reason why the Festival is held in such high regard by sporting enthusiasts across the land, and it’s because only champions can prevail, there aren’t many hard luck stories and usually the best horse wins.

When a horse runs well at the Festival, time-after-time they come back to show the same level of form.

There is no greater example of this theory than last year’s Gold Cup Bobs Worth, who reportedly became the first horse since the great Flyingbolt in the 1960s to have won three different festival races.

There is no horse in training that relishes the Cheltenham hill like Bobs Worth and Nicky Henderson’s superstar is the 3/1 favourite with Bet365 to land his second Cheltenham showpiece in 2014.

However, although he is a tough and determined character who loves this track, he is far from unbeatable.

Henderson’s charge has never run on ground quicker than good and if conditions were of such on the day, then there would be a huge chance that Henderson would not even run him.

If he did, then he wouldn’t be at his best. In our eyes, he’s ground dependant and taking 3/1 on a horse like that isn’t a smart bet. Tough as old boots and an admirable horse but he’s not an ante-post betting proposition.

So, if our eyes aren’t drawn to the favourite, where is our money going?

Many of you will be swearing at your screen at that assumption. “How can you put faith in a horse that has fallen in his last two starts – including at the Cheltenham Festival”, we hear you scream.

Plenty of reasons, as you ask.

Boston Bob has been thought of as a Gold Cup winner the moment he arrived at Willie Mullins yard. Built like a heavyweight but with the agility of a 110m hurdler, this horse was backed off the boards in the Albert Bartlett Novice Hurdle two seasons ago but only found one too good on the day in the form of Brindisi Breeze, who tragically died in a terrible accident two months later.

His season as a novice chaser was a strange one. After scraping home twice in Ireland, he turned up in the RSA Chase and led going into the final fence after making a sweeping move three from home in the style of a very good horse. But he misjudged the fence horribly and came crashing down.

His jumping became a bigger issue in the Champion Novice Chase at Punchestown with another fall. Again though he may not have been beaten when falling three out as he has come from impossible positions to win before.

You feel that the true potential of this horse has yet to be seen and with another year under his belt under a master trainer, he could improve to be a big player at the three mile chase level.

Also, 10 of the last 13 had either won or finished second at the Festival before and an Irish winner is due with the last winner coming in 2006.

Boston Bob is by no means guaranteed to be a world beater, but at 25/1 with Bet365, it’s worth paying to find out.