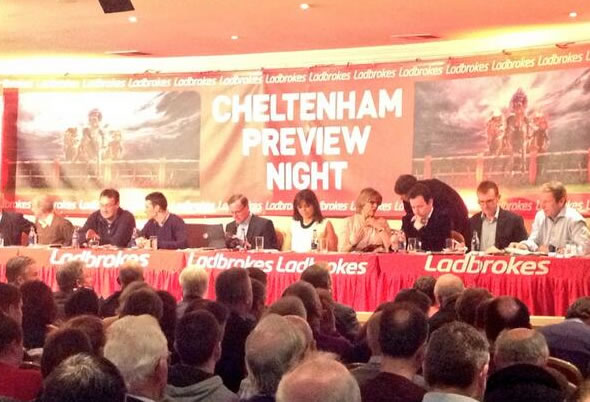 The key to these types of nights is to gauge which information is relevant and which is complete tosh. One of the more informative in terms of unique info was held at Waterford and sponsored by Ladbrokes earlier this week.

Most of the talk centred on the chances of Willie Mullins’ Vautour, who divided opinion between the panellists. Russell said that at the prices he’d be taking him on and that Ruby Walsh got an easy lead when dictating matters at Leopardstown last time out.

Luck disagreed, whilst also highlighting David Pipe’s The Liquidator as a lively outsider. McGrath really wasn’t keen on Irving, who he doubts has the finishing kick for a Supreme winner and Josses Hill is impressing Barry Geraghty according to Harrington.

As the trainer of Jezki the action was straight onto whether Harrington thought Jezki is good enough to challenge with Francome cheekily asking whether he was a pacemaker for JP McManus’ other runner My Tent Or Yours. Harrington said he had it all to do against Hurricane Fly, who she feels will win the race. Francome agreed but Russell, although declaring the Fly is a superstar, tipped up Our Conor and The New One.

Talk briefly turned to Annie Power, who still is in the race and can be backed at 7/1, and the majority agreed that she should run in the Champion but Russell did claim that the horse should either in the Champion or wait for Punchestown, therefore skipping the World Hurdle altogether.

This race was quickly defined as “awful” by most of the pundits but that’s not to say there weren’t strong opinions.

Surprisingly, most of the talk surrounded Sizing Europe as a cracking each-way bet. Segal, McGrath and Harrington all were strong on the chances of the former jumper, who is guaranteed to jump round but whether he’s good enough to go with the market principles.

You can see why Dynaste has been very well backed in recent weeks considering the amount of support came his way from the panel for this race. He was 12/1 just a week ago.

Segal, who had put Dynaste up as a selection in his column, was strong on the Pipe runner as was McGrath, Luck and Francome whilst Russell seemed quietly confident about First Lieutenant running in this race. After all, the race is sponsored by his owner.

Few decent snippets here. Russell pondered whether, as he suggested, that if Annie Power misses Cheltenham Walsh will get the leg-up on Big Buck’s, instead of Sam Twiston-Davies.

He could have been playing devil’s advocate but it makes logical sense. McGrath agreed and was very negative towards Twiston-Davies and his ride on Big Buck’s in the Cleeve Hurdle.

Segal completely ruled out Big Buck’s and the panel thinks Annie Power will be favourite on the day if getting the green light.

“Silviniaco Conti is a certainty,” Segal bellowed out, which was met with some raised eyebrows.

In fact, there wasn’t much positivity towards Bobs Worth with Russell claiming the Irish challenger Last Instalment is a better horse than Sir Des Champs. You got the feeling he wasn’t jesting with that comment either.

Luck agreed with Russell, calling him (the horse) a superstar. There was a little squeak for Harry Topper’s each-way chances from Francome but Russell quickly stepped in, claiming the horse would take half of the birch from every fence with him. He’s not a fan.

•             Ruby Walsh could end up riding Big Buck’s according to Russell, who feels Annie Power will miss Cheltenham