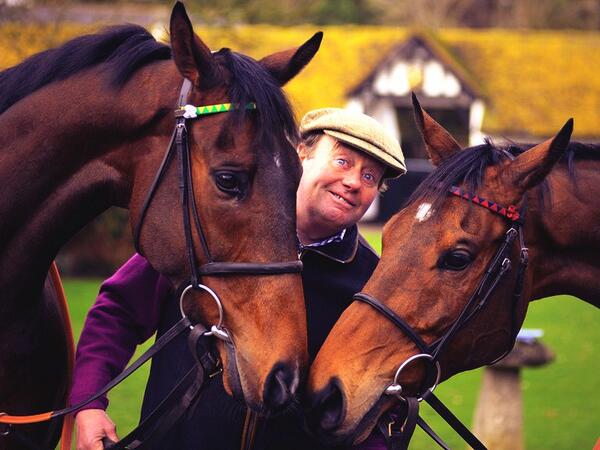 From previous experience of attending Cheltenham Festival preview nights, the one in the calendar that I try not to miss is the Sandown Racecourse one after racing on Imperial Cup day.

This year’s was no different as training monsters Nicky Henderson and Paul Nicholls sat on the panel along with Big Buck’s owner Andy Stuart and William Hill’s Kate Miller. Nick Luck hosted proceedings and a great night was had by all. Here’s what we made of it all.

Henderson began the talks by saying that Irving is the speed horse of the race and he has been unsuccessful in chasing him all season. He runs two in the race and it was clear that he feels Vaniteux is the stronger of the two despite Josses Hill running a blinder at Kempton earlier this season.

Nicholls added that Irving is a professional horse and that he worked well at Ditcheat on Friday and the drying ground will suit him well. He heard that Wicklow Brave might be the one for Mullins and wonders whether Vautour has got the pace to go with his boy.

Henderson revered to My Tent Or Yours as speedy, which would worry me in terms of his make up for a Champion Hurdle and that he also was tempted to go two mile chasing with him this season rather than go for the pinnacle hurdle race.

Nicholls stated that he does like The New One as a contender for Cheltenham, although he is young and he needs to sharpen up his hurdling a little. He disclosed that Ptit Zig will run but shouldn’t trouble the big four.

According to Henderson, everything is looking good with Captain Conan and that after his two racecourse gallops he was in his A-Team.

In a weak race, he seems to think he has a fantastic chance. He also reassured that there was nothing physically wrong with him his lacklustre performance in the Tingle Creek, just his mineral potassium levels were all wrong.

Nicholls reckons that it is an open race. Since his breathing operation, Hinterland is 2-2 since and ran a faster time on the same card as Sire De Grugy at Sandown.

Last week he jumped eight fences at Wincanton and is now in the mix. Nicholls isn’t the first person to point to Hinterland as an each-way bet in the last few weeks.

Miller had a market update and said that Sire De Grugy continues to be weak and all the money has been for Captain Conan, who she fancies too.

Henderson said that he likes both of J P McManus’ horses (More Of That and At Fishers Cross) and feels that the mares’ allowance (7lbs) for Annie Power will be critical.

Nicholls added that he was hoping for a hard race in the Cleeve for Big Buck’s and he was ridden to instructions in order to get him fit for the main day.

Though he thinks that the race is won by stayers and Annie Power is the one to beat if she stays and if there is no gallop then Celestial Halo will go on.

He stated that they won’t be lacking in pace and is interested to see if Zarkandar stays. He also mentioned that he believes Salubrious will run really tidily.

Stewart jokingly stated that he feels that Annie Power has already won and he has decided not to declare Big Buck’s, Celestial Halo and Salubrious.

Although after this teasing statement he clarified that he respects Annie Power but Big Buck’s has done it four times and sees no reason why he can’t do it again.

Henderson stated that Bobs Worth would have been brought down if Silviniaco Conti had fallen a yard to the right last year and publicised that last week has gone well for both Bobs Worth and Triolo D’Alene for whom the Grand National is the plan but he would rather contest him in the Gold Cup than risk top weight in a handicap.

Nicholls feels that Silviniaco Conti has improved this season and that the hill shouldn’t be an issue.