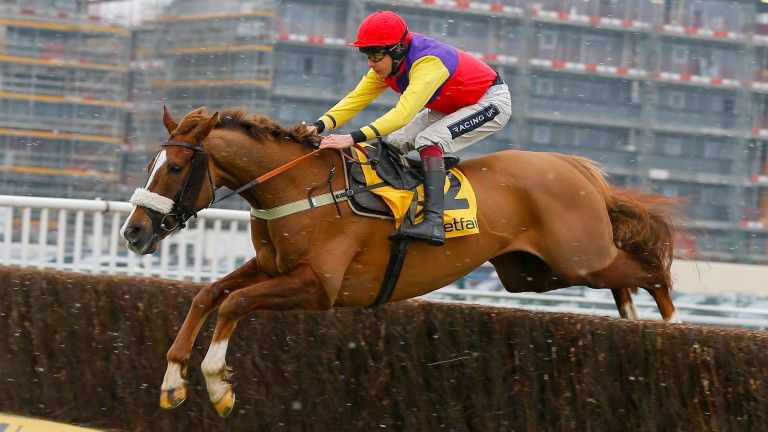 Warwck 14:40 – Novices’ Chase – 2m
This small field have notched up 7 wins between them this season and the most impressive due are Saint Calvados and North Hill Harvey.

Off level weights there wouldn’t be much between them but this time round Saint Calvados receives 7lbs and that a big swing.

He’s got the race at his mercy here as he gets 2lbs from Diego Du Charmil and Drumcliff as well.

They have both won nicely this term but they look to be a bit below the other two and conceding weights only makes their task tougher.

[wpsm_titlebox title=”Watch Racing Online with Bet365″ style=”4″]
Watch EVERY race in the UK and Ireland, live at bet365. You need not miss a second of the action – and there’s not a subscription fee in sight! Simply place a bet of at least £0.50 win or £0.25 each-way (or currency equivalent) on your selection(s) and enjoy the race, courtesy of bet365! And that’s not all! bet365 have now launched an At The Races archive service, which means that you can now watch a video replay of any ATR race.
[/wpsm_titlebox]

All eyes will be on NATIVE RIVER here and with good reason. He was brilliant last season and now being aimed at the Gold Cup he should be able to make his presence felt.

He does usually need his first run of the season but typically he would have been out by now so I’m sure his homework will have put him through his paces of late.

On figures it’s a close race and CLOUDY DREAM has the benefit of racing already this season.

He was arguably unlucky behind SMAD PLACE first time out but was well and truly beaten back at 2m by FOX NORTON.

Stepped up and on ground not to his liking he put in a great performance behind DEFINITLY RED so back on this slightly quicker surface he looks to be the play.

SAPHIR DU RHEU is very capable on these terms and will be ready to go, but he’s another one in here I think will come on plenty for the run.

[wpsm_titlebox title=”Racing Price Promise with Bet365″ style=”4″]
Every week there’s a host of superb races broadcast live on ITV Racing and, as always, bet365‘s fantastic offers will ensure that you get the best value.

bet365 will constantly update their prices for all races shown live on ITV Racing to ensure that they offer the best price on every horse running.

This offer is applicable to all bets placed from 10am on the day of race and only covers races shown live on ITV Racing unless otherwise stated by bet365. Best price or joint best price will be matched from the following list of Bookmakers: Ladbrokes, William Hill, Paddy Power, Coral, Sky Bet and Boylesports. Offer applies to bets placed on Win and Each-Way Fixed Odds markets only. All other markets, including Enhanced Price Win Only and Enhanced Place Terms markets that are priced separately to the Fixed Odds market and Tote/Pari-Mutuel (bets and dividends), are excluded from this offer. Races covered by Price Promise are also available for Best Odds Guaranteed, for new and eligible customers.

So place your Horse Racing bets safe in the knowledge that the bet365 price is the best price.

We’re being treated here to a battle between what were the first two in the betting for the Queen Mother Champion Chase before last weekend.

The word from the yards is that both will improve for the run, so while POLITOLOGUE has raced this season, he’s clearly enjoyed a break and is using this to prepare him for the Cheltenham Festival.

Even if he was fully wound up and match fit I would still fancy ALTIOR to take this because the horse has been at the top level for a long time now and for me is the best 2m Chaser in training.

He’s coming here after a Wind Op and an interrupted training campaign, but Nicky Henderson could have used today for a racecourse gallop (which he will have between this race and the Festival as well) so I’d suspect he’s working very wall at home.

Nicky Henderson also isn’t afraid of his horses getting beaten, but I would be worried if ALTIOR didn’t take this race in terms of winning at the Festival in March.