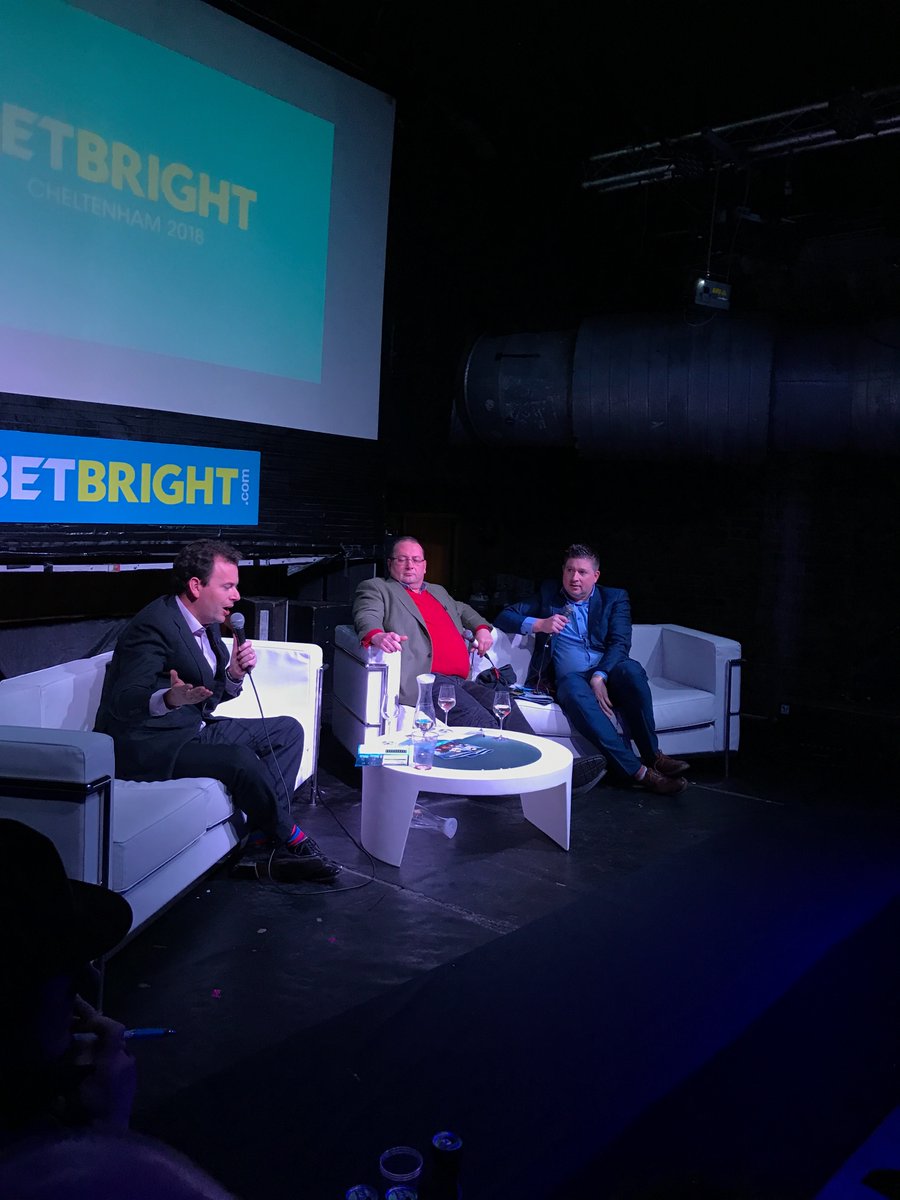 PK – What a load of rubbish, and you lot will never get those 2mins back. Footpad only beaten one horse, who was PM, and that first run since October.

SC Best horse on soft ground, he thinks, and not sure Footpad will be allowed a lead this time. FP wasn’t a star at 4, or 5, and thinks Sceau Royal will have the race run to suit. Deffo in first 3.

PK – BD Most likely winner, but had to be shaken up to beat John Constable last time. Better race this time, and he needs a bit of winding, but then does it easily. Has backed Wicklow Brave e/w w/o BD, and e/w. MTOY will run his normal race, but WB the value for him.

Someone in audience mentions Yorkhill.

DJ – Yorkhill an enigma, and thinks that he most likely turns up here. Horrible horse to figure out, who could pop up and win, but one you have to just let it win.

PK – Apples Jade as long as ground not really fast, which it can’t be on Tues. La Bague Au Roi is one he likes, but WG wants to go stayers he thinks. Apples Jade proper mare, and she’ll win.

DJ – Apples Jade, and only negative is the break. BDD very talented, but if she runs here, worried won’t see her over fences again, and she’s great over a fence.

Lets Dance going to run Stayers. Thinks BDD will be grade 1 chaser in time. Jers Girl forgotten horse of the race, but thinks she is coming back to herself, and will be overpriced. Could run well.

PK – Might lay Samcro… 4 of last 7 favourites been beaten here. Might be a superstar, part of me wants him to be, but he got shortened after winning a race that took no winning. Fell apart last time, and there were good horses that didn’t run their races. 2secs slower than Farclas race, and slower at every section.

He’s right fave, but doesn’t get excited about short prices. Likes Black Op, traded 1.04 in running, and got beat by Santini, who Henderson thinks will be a Gold Cup horse.

NL – Likes Black Op, and wonders if OTBS is still sparking like he was.

PK – Worrying when you see a horse not handle coming downhill, and that was a small race. Not gonna be better in a big race.

DJ – Samcro, thinks what PK said enhances Samcro. If he can win a slow 2mile hurdle, when he wants further, shows how good he is. Thinks he is the best young horse in training. Spoke to guy who bought Vinndication for owners, and its best horse Kim Bailey has. He has some good ones this year, and this is going for Ballymore.

PK – If I owned Monalee, he’d be going in the JLT after WC coming out. Be under 2/1, here he’s against some very good horses, and JLT fall apart. Loves Presenting Percy, but don’t like him running over 2 1/2 in heavy lto.

More he looks at it, more he likes Black Corton. If he started his chase career in November, he be short. Bryony Frost is better than 80% of jockeys riding. Luck pulls him, and he says if there is ever a woman champ, it’s her.

DJ – Likes BF, but not BC. Loves PP, and also doesn’t like running horse against OD over 2.5, when could have run him over 3m at Navan where he would be short odds shortly after. Hopes not, because he thinks he is most likely winner.

NL – If forgotten horses in race, thinks Al Boum Photo forgotten horse, and Mias Storm, who might not run. She was favourite to beat BC/EE/FW. If she runs, he’ll be backing her.

PK – Won’t know if Douvan is 100% if he runs, but if both do is an Altior man. Thinks he’ll go as close to Sprinter as you can get. Stat about chasers reappearing from long absence. 106 horses > 275days won first time out, and only 1 won second time out. Most be leg probs rather than wind, so not such a worry for Altior, but interesting.

NL – RR said we are intending to run both in CC. Nick said that Ruby will ride Min I presume as shorter price. If Ruby is riding Min, I’ll ask him why we’re running Douvan.

DJ – Shocked at how quick Douvan recovered. Best horse Willie has trained. Thinks 75/25 he makes race, and this would be his best training performance. Will have to be very good to beat Altior. Altior very special.

Both think that Balkos Des Flos has to be backed, will go off much shorter.

DJ – Sub Lt 2nd to UDS last year, BDF far better horse, won a plate impressively, albeit off 146. Came back against Road To Respect, and ran a cracker. Eddie O’Leary likes horse, and best chance to win the race.

PK – Loves BDF, and was 40/1 in JLT, got backed. Tanking when he came down. No idea where he would have finished, but handles track well. Doesn’t like soft, and we know UDS is fantastic horse. Sometimes you get on the wrong side of a horse, and just stay there. I’m like that with UDS.

Luck takes piss, and says shame when they win 20/26

UDS won worst Ryanair, and thinks BDF better than anything that ran last year, and CC is, too. Can’t have 12yo winning it, but will back Cue Card anyway, lol. BDF can’t be out of the frame as long as he gets round.

DJ – Don’t get affectionate about horses, never got it about The New One, but loves Cue Card. Bloody good horse, if BDF doesn’t win, no greater pleasure than seeing CC win.

PK – This race is brutal, really hard work for horses that are young. If you’re a novice hurdler, and need 3m in your last season, you’re a big backward future chaser. See these horses that turn up a short price, and go nowhere.

These horses jog round in small fields, and then come here 24 runners hard and fast, good ground. You need an experienced horse, here. Penhill having 27th Start, UKWIMH 17th.

Calett Mad ran over fences last year, this horse was cantering in the NH Chase last year, came back over hurdles this year. Bolted up in Pertemps qualifier. Can’t promise he’ll win, but at 25/1 he’ll still be there at the last, and lots won’t be there.

DJ – Agrees with PK, go back through and recent winners all plodders. Young horses taken out of comfort zone, and so many get beaten. If you fancy a horse like Santini, Next Destination, Cracking Smart. If you think there is a superstar, don’t back it, keep your money. For that reason, he thinks Calett Mad is the value, and Chef Des Obeaux is the winner.

PK – Not certain to run, Malcolm Jefferson not all that keen. If it’s soft he wins. Potential superstar, but don’t think he’s going to run.

PK – Not the greatest stayers, but unless you have a superstar, who runs 3m over hurdle? Doesn’t think Supasundae will stay, AJ outstayed him, and doesn’t think Yanworth will either. Backed La Bague Au Roi, but not sure if she likes Cheltenham.

Harry Fry UKWIMH been in for a full service & MOT, supposedly pleasing him. No NC this year, and could see him go well at double figures price.

Tony Bloom supposedlly trying to get a box at Cheltenham for the Thursday, and Penhill will be going. When Bloom lays one out, it gets hammered, and could go off fave.

DJ – L’Ami Serge, but scared to say it, cue dog noises. How anyone can tell me L’Ami Serge is 3x the price of Sam Spinner. Needs to go the other way, so needs better ground, and has good Chelts form. No way he’s out of the first 3. DJ only guy who can ride the horse. Great ride lto when he lost.

PK – If you’d said that a 1l win over Double Shuffle made you favourite for GC, you’d get the men in whitecoats out. Have to take him on. Road to Respect for him, who won at Cheltenham last year, and didn’t turn right up the hill.

DJ – Might Bite is right favourite, find chinks, and you can say he’s a son of Scorpion, look for the chute, throw it away. Might do that, bt prob best horse in the race. From a punting perspective have to find something to beat him.

his is a gold cup, you can make valid cases for anything you fance. 8 could win, and one I’m backing is Our Duke, like a mini Denman. Relentless galloper, if he gets into a rhythm, very dangerous. Beat PP over bad trip, and working well since. Noel good jockey, see him taking it up with a circuit to go, take lots out of comfort zone.

DJ – Penhill – Always been plan to come here FTO. Working well, looks well, and typical plunge horse. Jessica Harrington said that Supasundae was sulking around the place, and since he won CC & @ Leopardstown, diff horse. Thinks he’s the man. Not sure he stays, though.

Preview Night Credit – Tim Riggins over at fatjockey.[/vc_column_text][vc_cta h2=”” txt_align=”center”]These are our tips and opinions only. Wins are not guaranteed. We are committed to responsible gambling. Over 18’s only.[/vc_cta][/vc_column][/vc_row]