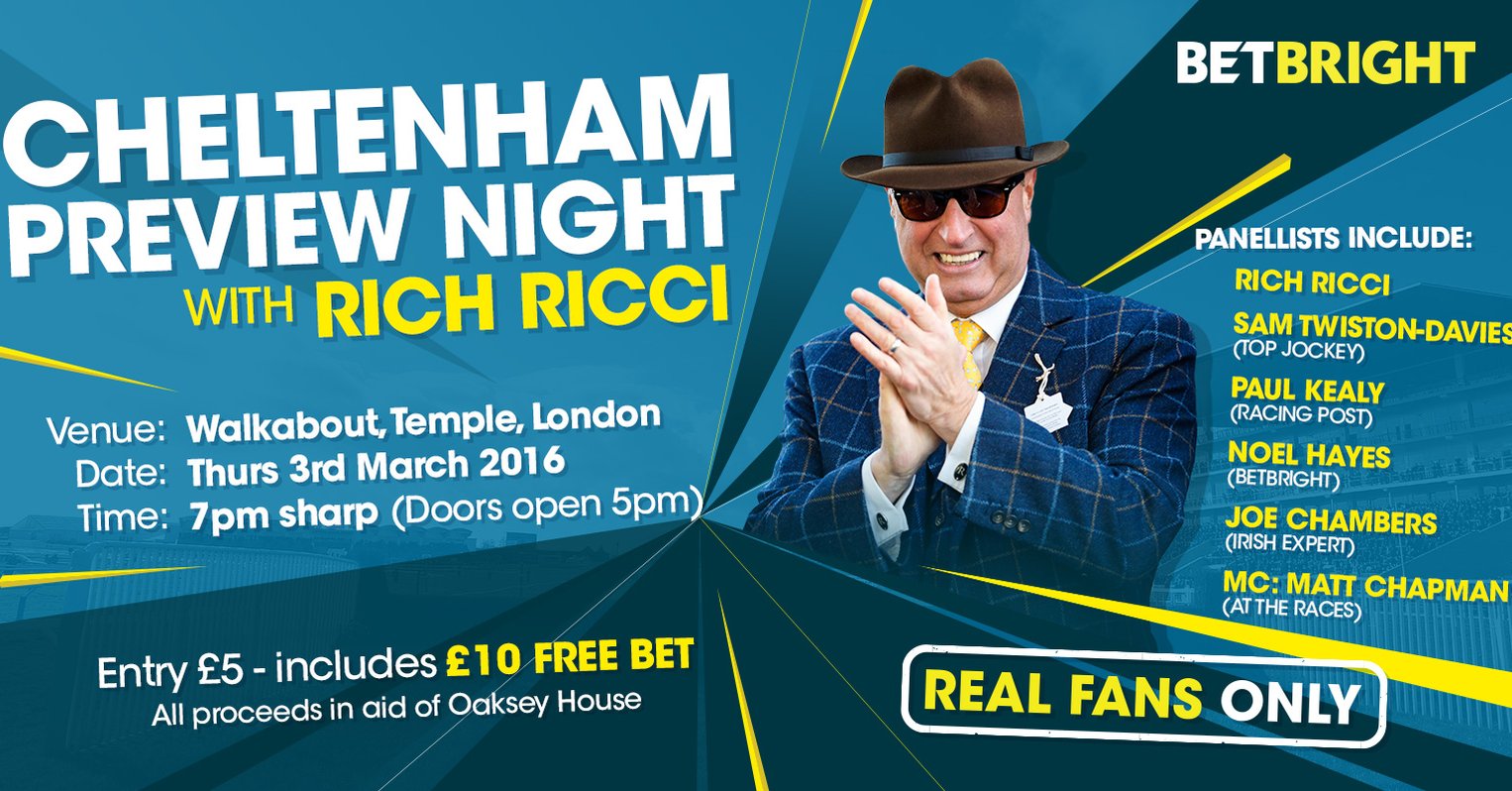 Supreme Novices
Rich Ricci – Min best and fast novice in training, better than Vautour at this stage but not as good as Douvan – “Would be unbelievable to win that race four years in a row. I keep talking myself out of him but see him work and believe again”
Paul Kealy – Wait till the day to back min, some bookie will price him at 2/1 on the day – Every fav as it stands will be a bigger price on the day. Someone will go 2/1. The form is stronger than it looked at the time”
Joe Chambers (Irish expert) thinks it’s a two horse race, Min or Altior
Paul Kealy quick to label Altior as his Nap of the meeting. Claims Nicky Henderson is extremely bullish about him
Joe Chambers – min to win by 6lengths
Sam Twiston-Davies goes Altior in the supreme if he had to pick a ride.

Neptune Novices
Paul Kealy will be shocked if Yanworth doesn’t win but yet to be tested in the heat of battle
JC thinks A Toi Phil is very good each way value at around 8/1
Rich Ricci – Long Dog has the form in the book and will go to this race, doesn’t expect him out the frame
All the panel go for Yanworth with JC taking A Toi Phil EW

Albert Bartlett
JC, against Barters Hill doesn’t think it’s jumping is good enough, Thomas Hobson could be a big danger
If Jp allows Bleu Et Rauge is run in this could be a great bet
Rich Ricci also happy to take on Barters Hill with his own horse Thomas Hobson
Paul Kealy, Shantou Village need good ground and a longer race and he will get in at Cheltenham, whatever race Fingal Bay goes to, back now and back often EW
Rich Ricci tells us Kalkir hurt this morning and out of Cheltenham 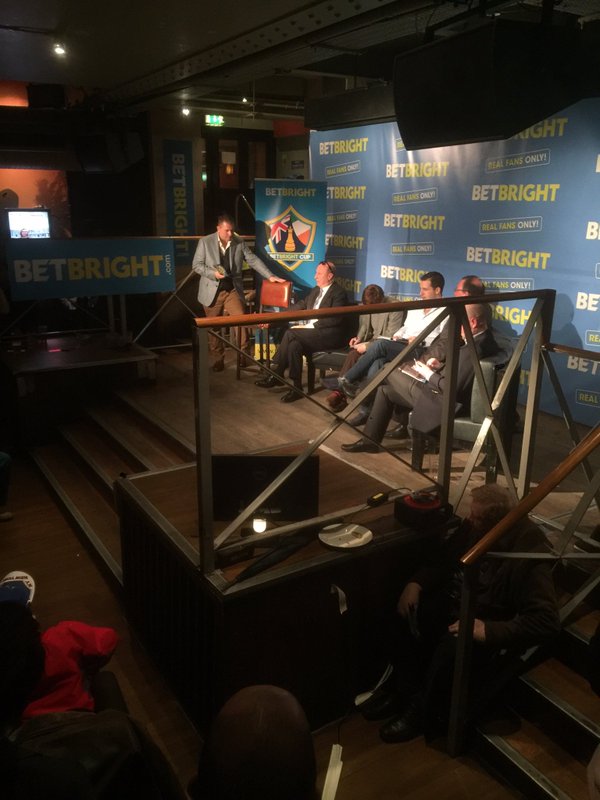 Arkle Trophy
Rich Ricci “Douvan is a monster and Willie thinks it’s the best horse he has ever trained, Douvan would win the Champion Chase carrying UDS on his back”
Paul Kealy, “Sizing John WILL finish second to Douvan and great beat at 4/1 without”
Nicky Henderson very sweet on Vaniteux but ain’t he on every horse says Matt Chapman

RSA Chase
No More Heroes a fault fav for JC, More of that for him!! 3/1 one of the best bets of the week
Paul Kealy also agrees More Of That should be fav
Sam Twiston-Davies rides Le Mercurey in the RSA says he has a each way shout at 50/1, will like the better ground
3 for more of that and Pk takes Monksland EW at 33s
Sam Twiston-Davies, Yanworth “away and gone”, Gangster ew also he likes
Sam Twiston-Davies, can’t see anything beating Barters Hill but if Thomas Hobson is close to the lead at the last he has speed to fly up the hill

Triumph Hurdle
Clan Des Obeaux worked all over Dodging Bullets this morning says STD
Diego-du-charmil working like a dream says STD, Paul Nicholls kept his mark down just for the Fred winter
Let’s Dance for Rich Ricci at 14/1 in the triumph
Sam Twiston-Davies also really likes bouvreuil in the last on Tuesday, had this in mind since having him in the stable
STD says dads best chance of a winner in Bristol Du Mai

Champion Hurdle
Who’s choice is it to send Annie Power to the Champion Hurdle? Rich Ricci says this one is “particularly difficult.” Annie Power can’t unsure where to go, but looking better day by day at home. “If she runs you have to think she wins.”
Sam Twiston-Davies – The New One has never been better heading into a Cheltenham festival – “He’s going into Cheltenham the best he can be.”
“If he finishes third or fourth then that’s the best he is. I’m going to be positive on him and if something wants to go faster they can”
Sam Twiston-Davies, Saphir Du Rheu had a wind op and looking better and better good ew chance around 12sJoe Chambers : “If she was good enough to win the Champion Hurdle two years ago good enough now. Nothing’s changed bar the owners emotions”
Paul Kealy : “Can pick holes in everything in the race. I wouldn’t be backing anything at a short price”

World Hurdle
Thistlecrack  “bombproof” Rich Ricci “So good, won’t look back.” Whisper given an each way shout by Joe Chambers.
Rich Ricci: “Let’s not waste time on the World Hurdle, Thistlecrack away and gone!!”

Champion Chase
Un De Sceaux best horse in the race by a mile, Pk
Gods Own without the fav for Pk.
Paul Kealy on Un De Sceaux  “He’s no superstar but he’s better than anything around at the minute over two miles” The panel tend to agree too.
Rich Ricci: “If Sprinter Sacre wins it would be great for racing.”
Very simple from the panel, UDS to win 8lengths and Felix Younger to follow him home

Gold Cup
Rich Ricci is very unsure about Vautour, Gold cup all nothing, hasn’t been himself back home but still has 10days till the big day. Rich Ricci claims Vautour only started working well 4 days prior to Cheltenham last year. And at the moment he’s just not seeing that spark, might miss Cheltenham altogether. Rich Ricci adamant he’ll stay
If Vautour doesn’t stay in Gold Cup he will win the next two Ryanairs says Rich.
On who Ruby Walsh will ride: “On class you’d have to say Vautour. On form Djakadam.” I just want Willie Mullins to win it
Djakadam cut: “A bad cut but it was clean. Flesh womb. In great form now but he’s probably two or three days behind. That’s easily made up.”
Sam Twiston-Davies, Vibrato Valtat hopefully to nick a place at best, rest of the panel all say Road To Riches win and Village Vic ew chance
RR says Ruby still unsure who to ride in GC, for class it’s Vautour for form in Djakadam.
Djakadam is 2 or 3 days behind Vautour in training, whoever Ruby doesn’t ride, Paul Townsend has 1st choice
If std could ride any horse it would be Vautour
Paul Kealy, Don Poli the worse 5/1 shot in the history of racing should be 50/1!!!! Head says Vautour heart wants Cue Card
Everyone agrees Vautour for the Gold Cup  but Matt Chapman likes Don Cossack

Thanks to @GetYourTipsOut & Gary Saxby @gazsax for the twitter updates.