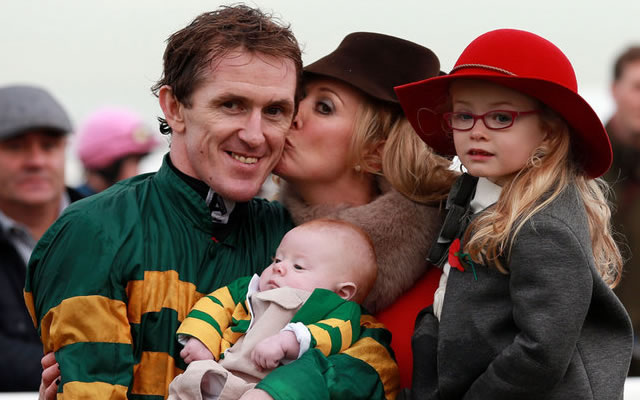 When young hurdler Chickabiddy was ridden to victory at Exeter in 1994 by a 20-year-old claiming jockey, whose face was steely as an iron man and possessed a driving finish packed with the power of a Olympic weightlifter, no-one could have foreseen what that man in the saddle would achieve in National Hunt racing.

Roll the clock forward 19 years and that jockey, who still has that steely demeanour but also 18 champions jockey titles and a body full of broken bones to go with it, has just reached a unique milestone that will be never be recreated: Tony Mccoy, 4,000 winners. Arise sir AP; you are the greatest that ever lived.

His win aboard Mountain Tunes on Thursday has completed an achievement that even the most hardened McCoy fan would have declared near-impossible five years ago. To sustain his dominance of a sport that puts such huge demands on the human body for 19 years is something extraordinary.

He is the only jump jockey ever to have ridden more than 3,000 winners, with perennial title runner-up Richard Johnson next closest on more than 2,500.

John Francome, Peter Scudamore and Richard Dunwoody all enjoyed huge success during their time in the saddle and propelled the standards and professional aspect of jockeyship, but McCoy has surpassed them on every single level.

He is super-human when it comes to riding racehorses. His dedication to the sport is scary.

Most jockeys when approaching their latter stages of his career tend to see a life away from the day job where you get followed around by ambulance, but not McCoy.

If a meeting is abandoned, he doesn’t take the day off, he gets his team to ship him to wherever there is racing on.

No matter this distance. No matter the strength of the horse he’s likely to ride.

He has a thirst for winners.

If someone put a gun to your head and made you chose a jockey to ride a horse where your life depended on it then McCoy would be your answer. No other man in the weighing room consistently delivers the high-level of horsemanship and power in the saddle than the 18-time champ.

In celebration of McCoy’s incredible feat and his tireless work to promote horse racing in wider circles, we look back on two of his most memorable rides from the 4,000.

This was a ride that showed all the reasons on what stands McCoy out from the rest. Pure guts. Pure determination. Pure class.

Settled in midfield through the first half of the race, Wichita Lineman, who had won at the Cheltenham Festival under McCoy the previous year, never really jumped a fence and looked far from interested.

Almost ten lengths off the leader with two to jump, McCoy never gave up and kept pushing.

The place money was secure for his backers but a win looked nigh-on impossible with 100 yards to run but his rider refused to give in and he somehow mowed down the idling leader Maljimar in the dying stride to the utter amazement of the watching racing world.

A horse pulls himself mid-race to a complete standstill but still runs out a winner. Only McCoy.

Things looked to be going smoothly for Drill Sergeant early on, always travelling nicely and jumping with efficiency, McCoy had stolen a clear lead on the field before the unthinkable happened.

The horse stopped racing and lost his lead, shuffling back to last place. Race over. Oh no. McCoy cajoled the horse back into his strike and set sail for the lead once again.

He picked off his rivals one by one. Drill Sergeant was somehow back in front three out, and although the chasing pack closed in, McCoy wasn’t to be beaten in the finish.

Of course there are many other remarkable rides from McCoy, in particular his 2006 success on board Brave Inca at Cheltenham, together with successes on board Binocular in the 2010 Champion Hurdle. and Gold Cup wins with Mr Mulligan in 1997 and Synchronised in 2012.

And of course, the full house with victory at the 2010 Grand National on board Don’t Push It.

We salute you AP!