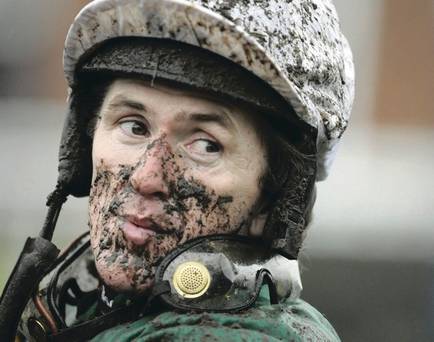 After recently reaching the milestone of 4000 winners, sure AP McCoy has a big shout for top Cheltenham Jockey at the Festival?

One word to describe him: Immovable

The 18-time Champion jockey is one of the greatest jockeys horse racing has ever produced and unsurprisingly his pedigree at the Cheltenham Festival is one that is feared by bookmakers and relished by punters.

Settled in midfield through the first half of the race, Wichita Lineman, who had won at the Cheltenham Festival under McCoy the previous year, never really jumped a fence and looked far from interested.

This laziness took its toll at the ninth fence, where he made a serious error. Backers of the 5/1 favourite would have been forgiven for tearing up their betting slip as he continued to run in snatches and again hit the third last, almost ten lengths off the leader.

However, under McCoy’s urgings, his stamina came to the fore after the last fence.

The place money was secure but a win looked nigh-on impossible with 100 yards to run but his rider refused to give in and he somehow mowed down the idling leader Maljimar in the dying stride to the utter amazement of the watching world.

Anyone who backed him had his quite brilliant jockey to thank as he gave him a monstrous ride, one of, if not the best, we have ever seen at Cheltenham.

He’s my favourite horse of all-time.”

A champion and also modest. What a man.

A simply stunning horse race, which gave everyone an indication of just how special McCoy was. Edreson Bleu jumped impeccably around Cheltenham’s two mile course from the front but his rival Direct Route was travelling by far the better as they approached the final two fences.

With McCoy pushing away, Henrietta’s Knight’s fast ground-loving speedster found two more huge leaps but was headed on the run-in by Direct Route, who looked set to sail past.

However, this race had been top of McCoy’s wish-list ever since starting out as an apprentice and with all his might, he rallied his game mount to find more once headed, and snatch the race back with his last stride.

An old fashioned gutsy, give-it-your-all, type of horse is what McCoy commonly produces his best on. One that will respond to his urgings in the final 100 yards. That 10 per cent extra is what stands McCoy from the rest of the weighing room.

In his retained job as exclusive rider for all JP McManus-owned horses, you will see McCoy taking the saddle for a variety of different trainers, but more often than not, a horse in the famous green and yellow hoops will be trained by Jonjo O’Neill.

At the time of writing it’s hard to really pin-point where McManus’ strengths will lie.

He’s bound to have plenty aimed at the handicaps for starters, but one horse McCoy will especially be looking forward to getting back aboard at the top level is last year’s Supreme Novices Hurdler runner-up My Tent Or Yours, who can be backed at 6/1 to provide McCoy with his third Champion Hurdle crown.