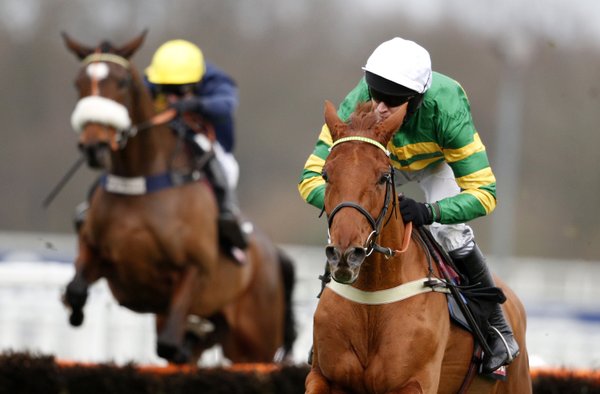 Everyone loves an after timer in this game: here’s one for you.

At the start of the season trainer Alan King was 4/1 to train a winner at the Cheltenham Festival.

It looked a huge price at the time. Unfortunately for this writer, he didn’t upon his urgings and another ante post belter slipped through his clutches.Fast forward and King is readying a fearsome squad for Cheltenham and that the 4/1 on offer is now nothing more than a distance memory.

He’s trained 15 winners in total at the Cheltenham Festival and his fabulous five-timer across Doncaster and Cheltenham on Trials Day showcased just what he has to offer when the Festival rolls into town this year.

We’re keen to get the King horses on side this year and we have eyes on a tasty 40/1 double involving two of his talented string.

“He’s frightening – in a good way – and he could be very special.”

Those were the words of King following Yanworth’s spectacular rise to the head of the market for the 2m5f novice event.

Yanworth romps to victory in the Neptune Novices Trial at #Cheltenham Now 9/4 for the Neptune.#CheltenhamFestival pic.twitter.com/eX2dm0QzV2

His run in the trial for this race on Cheltenham trails day was spectacular. It was a performance that had all the hallmarks of a potential Champion Hurdler. He travelled like a horse with a serious engine, skipped over his hurdles in nice style before cruising clear on the bridle on ground that surely would have blunted many of his attributes.

That’s the thing with this horse, there’s so much more to come as he shapes like an animal that will be seen to his best effect on better ground in a fast run race – conditions he’ll get at Cheltenham. His main danger on form and according to the market is Bellshill from the ever powerful Willie Mullins stable.

However, this horse looks more workmanlike than potentially top-class and is by no means one of Mullins’ big guns for the Festival. It’s an easy case to argue that Bellshill looks woefully short compared to what Yanworth is trading at.

I’m certain the King horse will shorten up the closer we get to the day.

The Triumph Hurdle market is one that I’m prediction will undergo a huge shakeup between now and the Cheltenham Festival. At the head of the market we have Ivanovich Gorbatov – a 9/4 shot – who I’m yet to be completely taken by.

Yes, the form of his maiden hurdle win has worked out sensationally well from a form perspective and he’s been very well backed by the right people, but the Triumph can be a funny race and short price favourites are there to be shot at. I’m more than happy to chance King’s Sceau Royal against the favourite.

King has given Sceau Royal a mid-winter break after a couple of impressive wins before returning for the Adonis Hurdle at Kempton in February prior to a tilt at the Cheltenham Festival race.

King knows what it takes to train a Triumph winner having won it twice with Penzance (2005) and Katchit (2007) and reading between the lines it seems as though Sceau Royal is the stable’s number one man for the job.