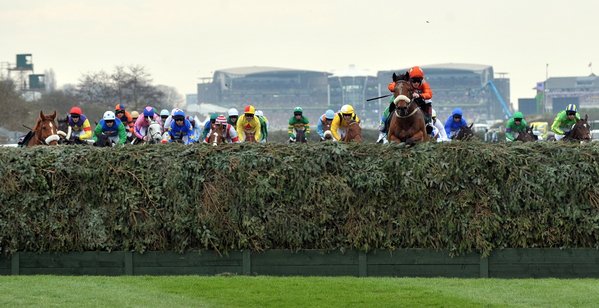 Annie Power and Cue Card were the stars of the opening day at Aintree Thursday, as our attention turns to Fridays card, with Limini and Vautour featuring.

This looks a tricky race to start the day off with. There’s two that stand out on form and they are Ma Du Fou and Tycoon Prince.

Both are talented novice hurdlers who are having their handicap debut today. Tycoon Prince looks to be on a very nice mark for what he has done.

He was 2nd to Moon Racer in a bumper, he beat Up For Review in a bumper and he was 2nd to Bellshill last time out. A mark of 139 looks very appealing given that form.

They’ve skipped Cheltenham to come here and he will love the course and ground. He has a big chance at a nice each way price. There are a few outsiders in here that I like too. Mad Jack Mytton showed up well in a handicap at Cheltenham but he just didn’t get up the hill.

The sharper and flatter track here will suit. I could see him out running his price and I’d give Qewy and Whiteout a chance too. It really is an open race but I’m going for the Gordon Elliott trained Tycoon Prince.

This race could be a cracker. It most likely going to come down to a duel between Limini and Buver D’air. Limini was very impressive when she won at Cheltenham in the new mares novice hurdle. Her trainer Willie Mullins thinks the world of this mare and he think she could be good enough to win a group race on the flat.

This track will suit her more than Cheltenham did and she won going away at Cheltenham. She needs to improve again here today if she wants to win. She’s taking on geldings for the first time today. She gets 7lb mares allowance which will help. Buveur D’air was very impressive this season and ran a great race in the Supreme Novices Hurdle at Cheltenham. I think he might of gotten closer to Altior and Min if he had of been ridden more prominently.

The form of that run is the best on show here. Limini will prove very tough to beat but I’m a big fan of Buveur D’air and I’m going to side with him today.

I think this is the bet of the day. He’s a horse that looks on the up and up. He won the RSA at the Cheltenham festival in great style.

His trainer said the horse has never been better and has come out of Cheltenham in great order. He thinks the horse will really like the course and ground. He was a good fourth in a Grade 1 novice hurdle at this meeting this year but he’s clearly a better horse over fences. I think he can follow up his Cheltenham with a win here.

All of the other runners bar Otago Trail ran at Cheltenham. I’d give that one a chance. He’s the fresh horse and could go well at a good price.

Vautour is by far the best horse in this race. He was flawless in the Ryanair at Cheltenham. He is one of the best horses in training. His only defeat this season came at the hands of Cue Card. That horse won the Grade 1 here on Day 1. Vautour is 2/7 and is not a betting proposition. I’m going to post up a horse on the betting without Vautour market. Vibrato Valtat was running a good ran up until falling in the Ryanair. If that one is unscathed from that fall I think he could be the one to chase home Vautour.

This race is run over the grand national fences and is always a great spectacle. 30 runners go to post and there going to be a lot of thrills and spills in this one. Most firms will pay 5 places and outsiders have a great record in this race. I’m going to tip two horses.

Two horses I believe have been laid out for this race. Dare to Endeavour was 2nd at 50/1 in the Becher Chase over these fences in December. He showed a real liking to these fences and he ran a cracking race. I think the trip of 3 mile 2f was too far. This trip of 2 mile 5f is sure to suit him better.

I’d ignore his last run the ground dreadful that day. He will love this better ground. I think he’ll get placed at worst if he gets round safely. He’s a really nice price at 25/1 and I think he has a live chance. The other one I like is La Vaticane. He was very impressive last time out, he won by 23l and the horse he beat is no slouch.

He’s an ex french horse who has had only 5 runs in Britain.

He is still unexposed and he’s a solid jumper. I’d also give Pass the Hat and Dromnea a chance but the preference is for Dare to Endeavour and La Vaticane.