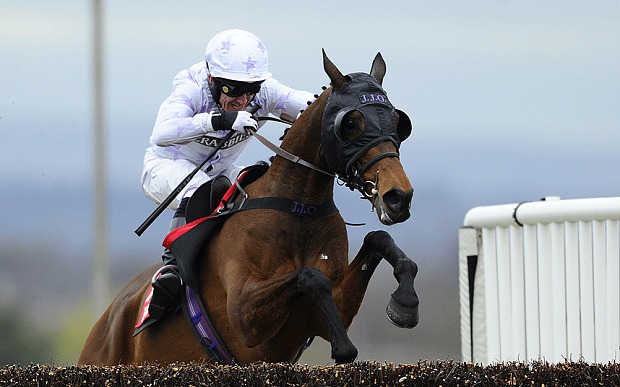 The days are slowly ebbing away in terms of AP McCoy’s career.

Every day the inevitable is closer. He even could retire this Saturday if he wins the Grand National on Shutthefrontdoor.

We need to drink in his greatness at every opportunity we get whilst also allowing the famous AP drive in a tight finish to reward us with a winner.

That’s the plan I have today, as I fully expect to see McCoy come home in front on Holywell in the Betfred Bowl at 2:50 on the first day of the Grand National meeting from Aintree.

This may be the last time I ever back a AP McCoy ridden-winner. How weird does that sound.

Cracking offer for Thursday to pick up: Get 8/1 on Holywell just to PLACE with Coral!

Holywell has a fantastic chance in the feature race and I’m fully expecting him to frank the form over Silviniaco Conti from the Gold Cup.

The Jonjo O’Neill-trained chaser finished fourth in a hot renewal of Cheltenham’s most famous race, just getting galloped at a crucial time when the eventual winner Coneygree quickened the pace.

He lost nothing in defeat and rubberstamped the theory that he’s a chaser that has every right to be amongst the leading contenders in all Grade One’s over three miles.

Holywell won the novice edition of this race last season at Aintree and was spectacularly impressive, beating Don Cossack by over eight lengths.

That running certainly suggests that Aintree brings the best out of this gutsy chaser and he should be right at home returning here on Thursday.

Silviniaco Conti isn’t at his best when running at Cheltenham – that’s for sure. Aintree is more his track as shown by his win here last year in this race and when winning two King George VI Chase at Kempton.

However, this new crop of young chasers showed at Cheltenham that they are of a better standard that the previous crop. At 7/4 I’m all over Holywell to confirm that theory.

Paul Nicholls may well be out of luck with Silviniaco Conti but Vibrato Valtat may make the day a winning for the champion trainer in the One Magnificent City Manifesto Novices´ Chase at 1:40.

The progressive two-miler found Un De Sceaux far too good at Cheltenham last time out in the Arkle and weakened to finish fourth after trying to put it up to the winner from a long way out.

Cheltenham is never going to be his track though and he’s much more suited to Aintree’s less demanding finish.

Josses Hill finished in front of the selection at Cheltenham but I’m expecting that form to be reversed back at a far more suitable track where Vibrato Valtat can use his cruising speed and quick jumping to good effect.

The Nicky Henderson-trained horse has plenty of talent but has yet to totally convince with his attitude or jumping.

It wouldn’t surprise me to see him stepped up in trip next season in order to try and eliminate his novicey mistakes.

Vibrato Valtat should have his measure and should be backed at 13/8.

Back Holywell at 8/1 just to place with Coral